Most of us are familiar with the pains of moving – the sofa that’s an inch too wide to fit through the doorway, or the elevator that breaks before you’ve packed your first box. Roughly 40 million Americans experience these pains each year, but we rarely stop to think about the far-reaching consequences of a choice as seemingly simple as which county to move to.

We can glimpse what these consequences might be through the lens of an individual mover: potential reasons for a move include the search for a different school district, better access to healthcare, affordability, employment, weather, and so many more. On a larger scale, though, the causality reverses. People moving into or out of a place (inmigration or outmigration) in large quantities often cause housing prices to rise, employment opportunities to be created, or healthcare to improve. This is why we can have Los Angeles County, with more than 10,000,000 residents, just a few hundred miles away from Alpine County with less than 2,000.

Over time, migration – in or out – can have a huge impact on a given county’s trajectory and growth opportunities, as well as the problems it will face. Using five Southern California counties (Santa Barbara, San Diego, Ventura, Orange, and Los Angeles) and five Northern California ones (Santa Clara, Santa Cruz, San Mateo, San Francisco, and Marin), we will analyze the trends of migration for these different areas.

The following chart shows, for each of our ten counties, the percentage of outmigration that remained in California from 2013 to 2017. 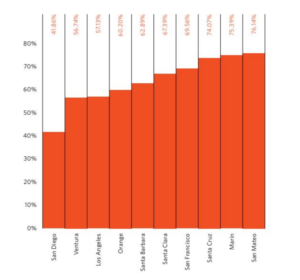 The first, while interesting, is likely answered by an interaction of sociocultural, environmental, political, and macroeconomic factors that simply cannot be addressed with migration data alone. The second, however, is well within the scope of our analysis – as a case study, we add a sixth Southern California county to our discussion. The image below shows the top ten origin counties, for inmigration, and destination counties, for outmigration, in Riverside County. 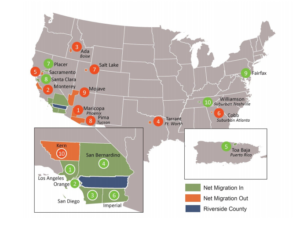 The green counties show the most popular origins for Riverside County immigrants, ranked from 1 to 10 – conversely, the red counties show the most popular destinations for Riverside emigrants. It is interesting to see that nearby counties dominate the inmigration list: perhaps because such a small geographic move allows people to maintain their employment, albeit with a different commute. The following figure adds some specific numbers to these rankings, shedding a bit more light on what Riverside County is seeing. 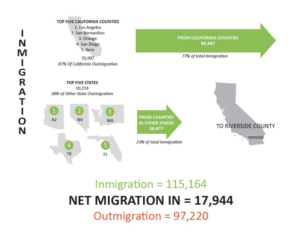 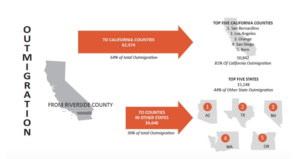 Comparing the two halves of this figure show that for more than ¾ of inmigration comes from other counties in California; for outmigration, however, this figure drops to less than ⅔. In both cases, this migration is concentrated within Southern California with relatively little influence of Northern California. Moving to a wider lens, we see that Arizona, Nevada, Texas, Washington, Florida, and Oregon are the most represented states in both categories: with four of the six states appearing in the top five lists for both inmigration and outmigration.

There appear to be two main commonalities connecting these states – geographic similarity (Oregon or Washington, both coastal states), or climatic similarity (Florida and Texas). As we might expect if these factors were both important to current or former Californians, the states which possess both (Arizona and Nevada) are highly ranked on both the inmigration and outmigration lists, with Arizona topping both lists. Interpolating back to the county level seems to support this finding – clearly, other counties in Southern California have both geographic and climatic similarity to Riverside County.

Though it’s probable that other factors are at play in these decisions to move, it is revealing that neither of the factors we’ve discussed are within any county’s control. This seems to imply that, despite each county’s best efforts to cultivate consumer-friendly, safe, and affordable neighborhoods, the migration patterns may simply be out of the county’s hands.

This is not to say that these other benefits do not matter – the truth is likely quite the opposite. However, it seems to explain why, despite land shortages, expensive housing, and chronic pollution, Los Angeles County and its ten million residents are predicted to add 60,000 jobs per year for the near future.