Skip to content
HomeNational TrendsDrought of the Century: Examining the Legacy of Prohibition

In this article we examine Prohibition’s legacy to understand the 115 U.S. counties that remain dry to this day.

2020 marks the 100th anniversary of the beginning of prohibition. Enshrined as the 18th Amendment to the Constitution, the law prohibited the production, sale, and transport of alcohol within the United States. Originally promoted by the American Temperance Society, the “dry crusade” gained widespread support among religious communities, especially Evangelical Protestants who viewed alcohol as responsible for corrupting health and the morality of society. By the time the Amendment made it to Congress, it had widespread support and passed by a margin of more than 2-to-1 in the House and 6-to-1 in the Senate. In the following two years, 46 of the 48 states proceeded to ratify the Amendment.

The unexpected consequences of Prohibition began to show almost immediately. Unable to purchase alcohol over the counter, citizens quickly began looking for illegal means. By the mid-1920’s Mob bosses like Al-Capone were making as much as $100 million a year (approximately $1.3 billion in 2016 dollars) from producing and selling alcohol. Having failed to better the health or morals of the nation, the national prohibition of alcohol was repealed at the end of 1933 by the 21st Amendment. 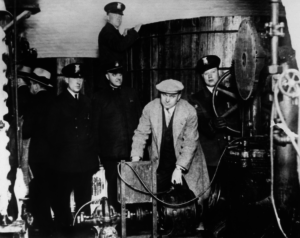 Fig 1: Detroit police inspecting equipment found in a clandestine underground brewery. Breweries and distilleries often operated with with little regard for sanitation, leading to dangerous alcohol on the streets.

After 1933, alcohol policy was devolved to states, and often further delegated to localities. After Prohibition, 38% of the US still lived in legally dry areas because 18 states officially continued prohibition laws. Some of these states allowed opt out laws, so localities could vote to become a wet area. These laws – and therefore dry counties – persist today with an estimated 18 million people still living in a prohibition era area.

Dry counties are declining though; in 2018 14 counties in Oklahoma voted to become wet, and Texas has gone from 142 dry counties in 1965 to fewer than 10 today.

The Lowe Institute set out to investigate whether counties that have remained dry share characteristics with the original Prohibition movement, and to examine if these counties are associated with any notable differences in public health or safety. For our tests, we used a logistic regression to predict whether a county would be dry or not based upon a variety of religious and socioeconomic factors.

The most important factor in predicting whether a state would be dry or wet is the “opt out” status. In Kansas, Mississippi, and Tennessee, where counties are dry by default, the rate of dry counties is 4.1 times higher than in the rest of the United States. This is likely the result of inertia and status quo bias in any political system. It is unlikely that if a current state switched to becoming opt out, the number of dry counties would drastically increase as our model would predict. The ruralness of a county is also an important determinant, with the most rural areas 3.3 times more likely to be dry than the most urban. Dry counties, however, have much more in common than just location.

Finally, we examined whether dry states shared any notable differences in quality of life by studying the county’s rate of poverty. From this we found that counties with higher rates of poverty were less likely to be dry; a 10 percentage point increase in a county’s poverty rate dropped the likelihood of a county being dry by 40%.

Eighty-seven years after repeal, Prohibition still has a hold on the better-off parts of rural, Protestant America.

Article written and researched by Leo Kitchell and Georgia Dietz.