Economic data arrive with a lag. In any recession, it is a challenge to forecast the present and recent past, let alone the future. Because gubernatorial executive orders have essentially shut down large swaths of the economy, the onset of the Covid–19 induced recession has been unprecedentedly swift, making out-of-date data unhelpful in assessing the magnitude of the contraction. However, the Lowe Institute, in partnership with Chapman University, has daily data on consumer sentiment in the state of California spanning the middle of March when the shutdown was enacted. We document a decline in consumer sentiment that is unprecedented in its speed and magnitude.

As part of our ongoing quarterly consumer sentiment indices, we surveyed a representative sample of 2000 Californians over a period between March 5th and March 26th. Governor Newsom issued the order to shelter in place at the end of the day, March 19th giving us a full week of data in the new economy. Calculating sentiment separately for the first and last weeks of our sample period, we can compare pre- and post-shut down sentiment. We register a decline in California consumer sentiment of 44% between March 5th – 11th and March 20th – 26th.

For context, this decline in consumer sentiment is slightly larger than that observed nationally in the recessions of 1973-5, 1979-80, and 2008-9 which were 40%, 39%, and 35% respectively. More to the point, these previous declines occurred over several quarters: 78 weeks, 91 weeks, and 65 weeks respectively. By contrast, California just witnessed a 44% decline in 2 weeks.

Typically, consumer sentiment is taken as a good indicator of whether consumers feel financially secure and will therefore spend money, driving final goods demand. Oddly, in this particular case, consumers are being prevented from much of their ordinary spending by the shelter-in-place order. Nonetheless, sentiment measures the degree to which loss of jobs and income, and uncertainty over potential future losses of jobs and income is weighing on households’ financial outlooks. The question going forward is whether the rebound in sentiment will be as swift as the decline once restrictions are lifted and ordinary consumption is permitted again.

Over the next few months, official data will be catching up to what is, from the perspective of ordinary households, already the biggest negative shock since WWII. And it happened in a macroeconomic blink of an eye. 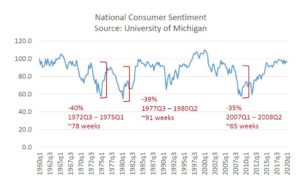