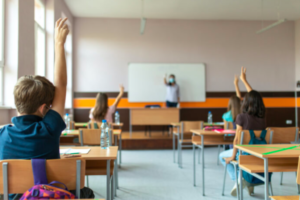 When COVID-19 hit the United States in the spring of 2020, many schools switched to remote learning for the remainder of that school year. For the 2020-2021 academic year, public schools had to implement various policies regarding social distancing and masking to be in accordance with the new federal, state, and local laws. Thus, nationwide, schools had different policies related to the mode of instruction: in-person, hybrid, or remote. The 2020-2021 academic year has seen a dramatic decline in public school enrollments. Parents may be removing their children from public school in favor of homeschooling or private schooling. This article seeks to understand whether and to what extent the mode of instruction influenced this observed decline in public school enrollment and also considers politics’ role in this decline.

To investigate this question, I’ve gathered data from seven states on county-level public school enrollment: Arizona, Arkansas, California, Florida, Georgia, Virginia and West Virginia. In the data, I focus on the Kindergarten class, since this grade’s enrollment and pre-kindergarten has seen the most dramatic changes. The data were gathered from the state’s department of education websites or other state websites, and include the total number of Kindergarten students in a given county from the academic years starting 2017 to 2021. Figure 1 displays the average annual growth rates for the Kindergarten class in each state.

From the figure, we see that for the school year starting in 2020, enrollment has decreased, and prior to that, enrollment was mostly on the rise. This finding shows that COVID-19 most likely had a negative effect on Kindergarten enrollment rates. A notable trend from the figure is that the blue and swing states (California, Virginia, Arizona, and Georgia) had the largest decrease in growth rates, whereas, the red states (Florida and Arkansas) had a smaller decrease. While mode of instruction is likely a key driver in school enrollment declines, I also hypothesize that county-level politics plays a role. As a result, I gather additional county-level data on Trump vote shares, poverty shares for families ages 5-17, and non-white population shares. To control for pre-pandemic changes to school enrollments, I include school enrollment growth rates from the academic year starting in 2018. Lastly, for the states Georgia, West Virginia, and Virginia, I include indicators for the mode of instruction (in-person, remote, or hybrid). These data are not available for the other states.

Next, I construct a dynamic linear regression model where the outcome is growth in public school enrollments in 2020-2021 and the controls include county-level measures for income, race, trump votes, instruction mode, and pre-pandemic enrollment growth. I consider two models, with and without the mode of instruction, because of data availability. In each model, I find that Trump vote share is insignificant, poverty is positive and significant, and non-white population is negative and signfiicant. The poverty rate finding might mean that counties with a higher income had more economic mobility. Due to this mobility, parents could afford a variety of schooling, like homeschooling or private schools. The nonwhite finding might mean that white people are more likely to switch to private schooling options. In the model with mode of instruction, we find that, relative to non-remote learning, remote learning is associated with a decrease in public school enrollments of 6 percentage points. Clearly, mode of instruction is a big driver of the decrease in enrollments; however, evidence suggests that there are a lot of factors at play, including income and race.

These findings show that there may be some trends consistent with political factors. However, it is necessary to do additional analyses with all states and their instruction modes included to account for potential bias in the selection of states. Furthermore, there are some factors I didn’t control for, like the decrease in birth rate, demographic shifts, and migration changes. Thus, we could gain a stronger understanding of how politics and schooling options play a role in our public education system.