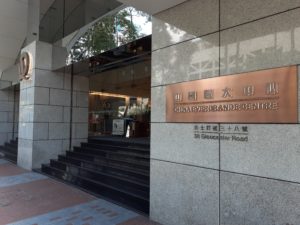 As the second-largest real estate company in China, Evergrande poses a threat of financial  contagion if it defaults. It outperforms competitors by aggressively outbidding others in  acquiring land from the government. Evergrande has become highly leveraged through this  strategy, with firm liabilities totaling 2 trillion RMB ($287 billion) in 2021 equaling 2% of  China’s GDP.

In 2020, Premier Xi Jinping implemented the “three red lines” policy to crack down on highly  leveraged real estate firms. Evergrande has since been facing the consequences of its risky  capital structure. Throughout 2021, Evergrande missed several repayment deadlines and  experienced a series of rating downgrades. By September 2021, its stock price had dropped 85%  from its January price.

The world watched closely as Evergrande struggled to make its debt payments, particularly  financiers in the United States. While geopolitics have negatively impacted trade flows between  US and China, regulations have yet to extend to capital markets and financial linkages between  the two countries continue to deepen. Since 2016, there has been a significant increase in the  number of American and European investments into Chinese securities, totaling $1.1 trillion in  the summer of 2021 alone. As of September 2021, several large American firms held significant  amounts of Evergrande shares. Given this, did US investors and the American public believe that  there would be a contagion effect from the Evergrande crisis based on Evergrande’s failure to  meet its payment deadline on September 22nd?

To examine this question, I constructed three portfolios containing American firms of interest  and observed their abnormal returns during the period of the missed payment shock. Abnormal  returns capture unexpected share price movements, those in excess of expected returns during  that time period as predicted by a three-factor CAPM, a pricing model that quantifies the returns  of similar stocks. Significantly negative abnormal returns during this time period signify that American investors reacted negatively to the Evergrande shock.

words, the firms in the third portfolio should be unaffected by the Evergrande shock and serves  as a control group.

I then constructed abnormal returns for these firms from September 15th to September 29th. It is  important to examine abnormal returns 5 trading days prior to the shock because investors may  have already anticipated Evergrande’s failure to meet its payment deadline, and their negative  reaction may be captured in the trading days leading up the September 22nd. For example, S&P  downgraded Evergrande to ‘CC’ on September 15th because they believe nonpayment risk is extremely high and a “default scenario is virtual certainty”, which may have influenced  investors. It is also important to examine abnormal returns 5 trading days post-shock in order to  observe any lingering effects in the market. 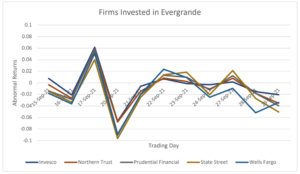 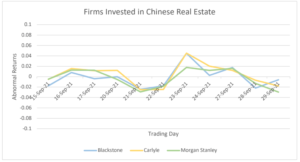 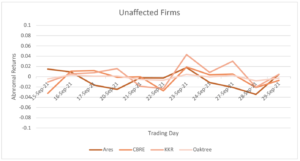 For the portfolio containing unaffected firms, the cumulative average abnormal return (CAAR) is  -0.019. The portfolio containing firms invested in Chinese real estate exhibit a similar range of  abnormal return values to the unaffected firms, meaning that investors did not believe American  firms invested in Chinese real estate would be negatively impacted by the Evergrande shock.

In comparison, the portfolio containing firms invested in Evergrande exhibits CAAR of -0.0402.  It is interesting to note that the day of the lowest abnormal return took place was on September  20th, two trading days before the actual shock took place. Overall, the difference in minimum  abnormal returns as well as CAAR between the unaffected firms and the firms invested in  Evergrande remain small, meaning that there is no significant negative reaction from American  investors.

The reason why Evergrande wasn’t China’s Lehman moment is eloquently summarized by Mr.  Motwani, who worked as an analyst at Credit Suisse during Lehman’s collapse: “The biggest  difference between the two is that Evergrande was a train wreck that everyone saw coming