The 2020 United States presidential election saw a major increase in mail-in voting as a result of the Covid-19 pandemic. This shift was politicized, with republicans falsely claiming the method was more prone to widespread fraud, and democrats hoping that an increased turnout stemming from mail-in voting would benefit their party.

While there still remains doubt surrounding the notion that higher voter turnout shifts an election blue, democrats’ theory relies on the underlying assumption that movement towards mail-in voting increases the number of individuals participating in the electoral process. Is this assumption correct? If so, how does the effect break out across registered and eligible voters?

To understand these questions, we looked at the last four US Presidential Elections for the state of California. California is the largest of the eight states that currently allow all elections to be conducted by mail and has utilized mail-in voting as far back as 1962. Since 2012, a majority of California citizens have voted by mail in US presidential elections, and most California counties offer a mix of in-person and mail-in voting options to cast one’s ballot. While the historical increase of mail-in-voting has occurred naturally through gradual adoption by voters, recent legislation like the California Voter’s Choice Act (VCA) has provided a boost. Passed by the state senate in 2016, the VCA provides a model for counties of practices including mailing every registered voter a ballot which can be cast at any vote center within their county. As of 2022, 27 of California’s 58 counties have adopted the VCA election model.

We compare the prevalence of mail-in votes and the turnout of eligible voters or registered voters to reveal whether mail-in voting and higher turnout are coincidental. 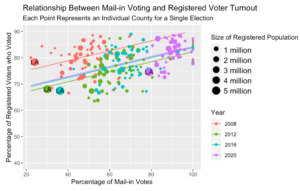 In figure 1, each of California’s 58 counties is plotted four times: once for each of the four elections. The coloration makes clear the increasing popularity of mail-in voting over time, and the rightmost vertical line reflects a number of counties that have mandated mail-in voting resulting in 100 percent mail-in voting. These counties tend to be sparsely populated. Eyeing the data, it would seem that, in any given year, counties with higher turnout also tend to have a greater fraction using mail-in ballots.

We want to estimate how strong the relationship is between turnout and use of mail-in balloting. Elections generate different excitement from year to year, so we’ll allow each year to have its own baseline level of turnout at any given level of mail-in balloting. For instance, at a given level of mail-in voting, turnout was highest in 2008 and far lower in 2016 and 2012. After pulling that out, the estimated slope of the best-fit lines predicts that counties will see a 1.9 percent increase in registered voter turnout for every 10 percent increase in the amount of mail-in voting. Underlying reasons for this relationship could be that many counties that primarily utilize mail-in voting send ballots to all registered voters, rather than relying on voters to commit to remembering polling locations and times. In the same vein, conflicts that arise on voting days that prevent an individual from physically voting are avoided through the use of mail-in voting. As a result, counties with higher portions of mail-in voting also experience increased turnout among registered individuals. 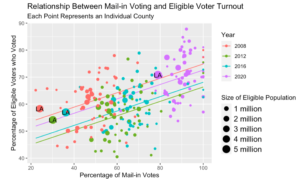 The fact that turnout among eligible voters is more closely related than turnout among registered voters may seem surprising, but becomes clearer when considering the possible scenarios of voters responding to the availability of mail-in ballots. The slope of Figure 1 represents a ratio between registered voters who would not have voted without mail-in, and registered voters who switched from in-person to mail-in but would have voted without mail-in. Increases in mail-in voting that are driven by people who are simply switching from in-person voting to mail-in voting do not change the turnout-rate on the y-axis. If all variation between counties were from these people, the slopes of Figure 1 would be zero. But if mail-in voting increases turnout by attracting voters who would not otherwise have voted, then the turnout rate (y-axis) rises along with the mail-in rate (x-axis). If all variation between counties is driven by these people, we would have a 45-degree slope. Our slope of 0.19 suggests that while most mail-in voters would have voted in-person, roughly 1-in-5 would not have.

Considering eligible voters adds another scenario to consider: the unregistered voter who both registers and votes as a result of mail-in voting policies. This added scenario contributes to the steepness of the model, explaining why eligible voter turnout seems to increase more than registered voter turnout for the same change in mail-in voting. Mail-in voting offers a pathway for unregistered individuals to participate in elections where in-person voting does not, as counties that prioritize mail-in voting often mail out voter registration information to unregistered individuals prior to upcoming elections who would not otherwise receive it. Mail-in voting is worth noting as a means of promoting voter registration alongside election participation.

Among California counties, the positive correlation between mail-in voting and voter turnout for both eligible and registered voters is clear. States seeking greater election participation should look to California as an example of using mail-in as a vehicle to promote broader participation.