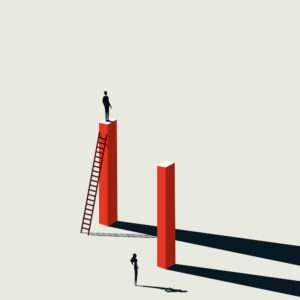 Sadly, some of the most intense democratic reversals have happened in nations such as Myanmar, which were previously seen as “beacons of hope” for democracy. A few countries appeared to be moving in a more democratic direction in the past, but have taken a U-turn in recent years. According to the Institute for Democracy and Electoral Assistance, this includes Myanmar, Afghanistan, and the United States. Additionally, the quality of democracy appears to be trending downward as well in recent years. Some scholars believe that the rise in income inequality has caused this democratic backsliding. Meanwhile, others do not believe that there is a causal relationship, but acknowledge the correlation. Still others believe that democratic backsliding simply has other more significant causes. What does existing data reveal about the correlation between inequality and democratic backsliding in recent years?

“Our World in Data” contains data on income inequality, one widely-accepted measure of which is the Gini coefficient. The Gini coefficient ranges from 0 to 1, where 0 indicates perfect equality of income and 1 indicates that all income goes to 1 household. “Freedom House” gathers data on democracy across the world, broken down into different indicators including rule of law, electoral process, political rights, and civil liberties. Together with a few other indicators these comprise the Total Freedom Score, taken to measure a country’s quality of democracy.

Drawing on these data in the period between 2013 and 2018, it appears that there is not a strong correlation between income inequality and democratic backsliding. The following graph depicts the change in inequality (change in Gini coefficient) against the change in democracy (change in Total Freedom Score).

We observe very slight correlation here – very close to zero. Rises in inequality do not seem to cause backsliding. However, after isolating the countries which changed in freedom status, there is a clear negative correlation. In the “Freedom House” dataset, the freedom status of a country can take on one of three categorical values: Free, Partially Free, and Not Free. Among countries that changed categories, there is a negative correlation between the Gini coefficient and Total Freedom Scores (figure 2). 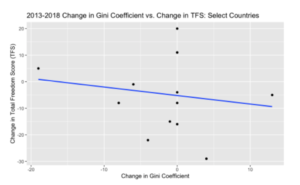