Skip to content
HomeUncategorizedIs it Who You Know, or What You Know? Investigating What Shapes Californian’s Opinions About COVID-19

Californian’s remain divided in their willingness to return to their pre-Covid lifestyles, but newly released data from The Lowe Institute of Political Economy at Claremont McKenna College suggest the causes of this split are changing. At the heart of this issue are the informational networks which form consumers’ opinions about the riskiness of economic activities. As Covid has mutated so to have these networks; today, race, political ideology, and location are core determinants of risk perceptions, while education level and frequency of watching news have diminished in importance since May.

Understanding Californians’ opinions about the riskiness of economic activity is fundamental to understanding the path of the recovery. A recent study by economists Chetty, Friedman, Hendren, and Stepner found that health concerns, not policy mandates, have depressed consumer spending. As a result, Chetty and his co-authors found that “in the long-term, the only way to drive economic recovery is to invest in public health efforts that will restore consumer confidence and spending.”

To measure which sectors of the economy Californians feel safe returning to, The Lowe Institute sampled 5,000 households across the state in three waves: early May, mid-June, and late September. Respondents were asked under what conditions they would be willing to participate in 24 standard activities like going to a restaurant, attending a sporting event, visiting a doctor, and shopping at a grocery store. These responses were then fit using an ordered probit model to determine which characteristics each set of respondents shared. This model controlled for gender, ethnicity, age, income, education level, region, employment status, political affiliation, and engagement level with political news. 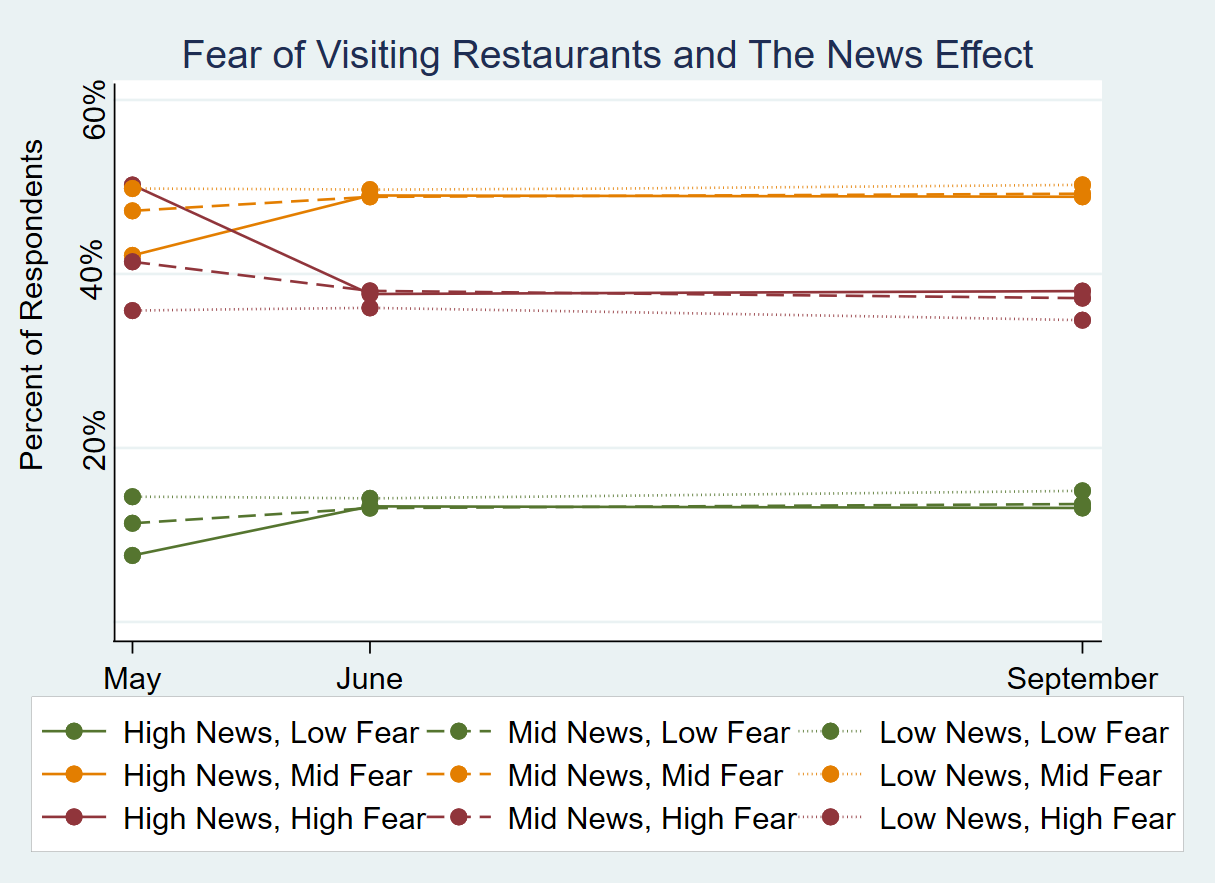 Figure 1: In May, the amount of time respondents spent following political news had a strong correlation with their fear of participating in economic activities. Those who frequently watched news were more fearful than occasional news watchers who were, in turn, more fearful than infrequent news watchers. By June, however, political news had no impact on Californian’s perceptions of the riskiness of standard activities. This has remained true since.

Our results show that early in the pandemic, national news and education were important but temporary information networks. Those who reported watching political news very frequently showed a significantly lower willingness to engage in 15 of the 24 activities, and on average responded 15% less risky than those who very seldomly watched political news. This result was independent of the news channel and medium, proving that media coverage was successful in reducing Californian’s Covid exposure. There was, however, an additional level of caution from respondents with bachelor’s degrees or higher, perhaps signaling that academic news sources instilled a greater sense of fear than non-academic sources. Alternatively, respondents with college educations are more likely to have relationships with other highly educated people, and it is possible that the information passed in these discussions among friends reinforced apprehensions to engage in economic activity. While both education and news engagement were significant in May, by June the networks provided no additional effect. This suggests the networks delivered no new salient information to their members. Increasing first hand experience with Covid risk may explain some of the shift away from these networks.

In essence, Californians have had to accept Covid as the new normal and the risk of leaving the house has lost its novelty. By May, workers in high exposure jobs such as sales and food service had become accustomed to the risk of Covid due to their frequent exposure, whereas workers in jobs which require higher education had less exposure from their work environment and thus saw leaving the house as riskier. This is consistent with new research published by the National Bureau of Economic Research which finds that “remote work is much more common in industries with better educated and better paid workers”. The elevated reluctance to leave the house seen among homemakers in May (statistically significant in one third of activities) would seem to confirm this theory. By September, even those still resigned to their homes had become accustomed to the risk of standard activities, and the effects for both higher education and homemakers had dramatically decreased. In fact, in each successive survey, respondents from all backgrounds became willing to engage in more activities, with most of the change in opinion occurring between May and June. 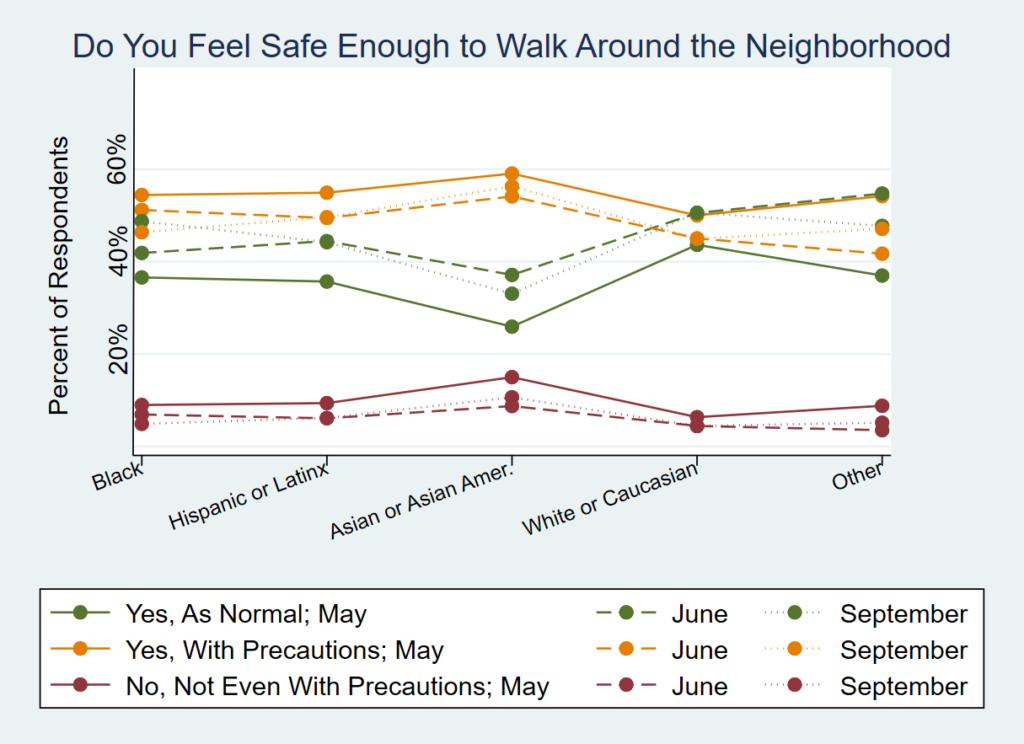 Figure 2: Asian Americans are approximately one third less likely as others to feel safe walking around the neighborhood without precaution. Responses from white Californians have not changed as much as respondents of color since May.

While the Covid zeitgeist is a particularly inclusive informational network, since June, ethnicity and political affiliation have been far more important covariates in explaining perceptions of safety. For 15 of the 24 activities, Asian American respondents were significantly more cautious than their white counterparts. This effect grew between May and June, and has stayed approximately constant since

then. At the other end of the spectrum, Black respondents were more likely to respond that they would engage without restrictions for 11 of the 24 activities. This was especially true of higher exposure activities including traveling and visiting places of leisure.

Figure 3: Republicans’ opinions haven’t changed since May while Democrats and neutral voters have become more willing to return to restaurants. Today, half of Democrats are willing to visit a restaurant, either with or without precautions. Four out of five Republicans feel the same.

The partisan effect on risk perceptions has been written about by others at length but it remained our largest effect, significant for all 24 activities. Interestingly, however, the gap in willingness to engage in economic activity has evened out between political camps. We also find that Orange County residents are more willing to participate in economic activity, even after controlling for ethnicity, politics, and income. This may be evidence that a high density of Republicans can create a local attitude that spreads to Democrats and neutrals; in other words, Californians may change their habits based on local norms. Or it may result from Orange County’s lower rate of Covid cases per capita than the neighboring counties.

These geographic and ethnic trends help explain the broader shift in Californian’s willingness to return to their regular lives. Early in the pandemic, opinions were largely shaped by what people knew; new information coming from both news media, political leaders, and relationships with highly educated people formed the public’s opinions. Today, the balance has shifted towards who people know. The information passed between neighbors and among kinship groups now explain a greater share of the variation in perceptions of Covid’s risk. The question now is just how costly this informational shift proves.