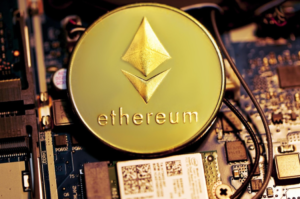 Late at night in February 2021, eccentric entrepreneur Elon Musk posted a photoshopped image emblematic of the way he shapes the cryptocurrency landscape. He edited his face onto the baboon from The Lion King as he held up lion cub Simba. Except, he also photoshopped the face of a startled-looking Shiba Inu dog onto Simba’s face. The final meme might seem nonsensical if it were not for the dog representing Dogecoin, the cryptocurrency popularized by Musk through his earlier Tweets. Although the coin started as a satirical joke, Dogecoin owners can now use it to tip creators on social media platforms, pay for Tesla Motors merchandise, and purchase other goods. Unlike Bitcoin, Dogecoin supply is unlimited. Observing Dogecoin alongside more substantive and popular cryptocurrencies like Ether (ETH) shows that jokes may be more important than we think.

Using December 2017 to November 2021 data from Yahoo Finance, NASDAQ, Etherscan, and Nomics, we built a random forest model to understand the relationship between Ether price, Bitcoin and Dogecoin, the stock market, Ethereum gas fees, and the volume of Ether traded. The model uses the 24-hour change in crypto prices, stock prices, gas fees, and Ether volume to assess if Ether prices increase or decrease alongside them. Establishing causation is challenging because many cryptocurrencies impact each other and external variables not included in the model may shape the crypto market. The model is able to predict the direction of Ether prices 80% of the time. Perhaps more importantly, the model can also help tease out the variables most helpful in predicting Ethereum.

Our linear regression that included all of the five above independent variables on Ether prices was statistically significant; each had positive correlations with Ether. The regression could explain 57% of the variation in Ether price changes. So, we opted to evaluate each of these variables’ predictive value using a random forest model.

The results of our random forest model show that, despite Dogecoin’s status as a meme-coin, it has a stronger relationship with Ether movements than all of the other tested variables except Bitcoin. This finding suggests that cryptocurrencies serving different functions and with different popularities seem more related to each other than to the stock market. 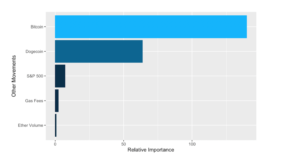 In Figure 1, the relative importance of the variables in a random forest model show their value in predicting movements in Ether. Perhaps unsurprisingly, Bitcoin price changes are the most important predictor of Ether prices increasing or decreasing. Its 139.84 relative importance was nearly double that of the runner up. Despite being a meme-coin, Dogecoin is nine times more powerful than the Standard & Poor’s 500 (S&P 500). One might expect the S&P 500, including stocks from established companies, would be more predictive of an established coin like Ether than the equivalent of a volatile crypto penny stock. At the time of writing, it trades at around $0.12. Ether prices seem to move in the same direction as the overall crypto market.

Ethereum gas fees, what consumers pay for Ethereum miners to securely process blockchain changes, and the volume sold had low relative importance at 2.24 and 0.66. A traditional linear regression demonstrated that every variable used had a statistically significant relationship with Ether price movements. One would think that gas fees would have a stronger relationship with price movements because higher gas fees would signal greater demand for Ether, fewer miners validating transactions, or both. Gas fee movements may be less effective in predicting Ether price movements because the demand for Ether tokens is not necessarily the same as the demand for using them in transactions. Many crypto buyers purchase coins as long-term investments, meaning that they would have fewer transactions to validate; in fact, long-term buyers hold 80% of Bitcoin.

Some experts predict that Ethereum, one of the most popular cryptocurrencies, will show a 400% price increase in 2022. The main drivers of cryptocurrency prices include supply and demand for them as well as the cost of producing tokens. In addition to enabling Ether—Ethereum’s token used to exchange goods—Ethereum allows developers to create smart contracts and decentralized applications serving a variety of purposes. Ether is the actual cryptocurrency traded, and all Ether is identical. The average person interacting with the Ethereum blockchain would only be using Ether as an investment or currency, but more sophisticated users may use Ethereum-based apps to sign contracts. In this sense, Ethereum has greater versatility than Bitcoin as both enabling a currency and a foundation network. It also enables more types of users. As such a critical cryptocurrency and mechanism used to purchase goods, exchange non-fungible tokens, and develop applications, the Ethereum blockchain and its coin’s price merit further examination.

As Bitcoin is the most popular cryptocurrency on the market, we would expect it to be a strong predictor of Ethereum prices. Unlike stocks, many popular cryptocurrencies do not have underlying assets. This means that the crypto markets may be particularly prone to sways in investor confidence instead of stock market fluctuations. Swings in Bitcoin may encourage investors to buy or sell Ether because they may use it as an indicator of faith in crypto more broadly. Even if Ether investors do not base their decisions on Bitcoin movements, Bitcoin may still be a good predictor of Ether prices since external variables may impact the overall crypto market. As Bitcoin and Ethereum are both popular well-established currencies, they may happen to move similarly. CoinDesk writes that the two coins are correlated.

As the S&P 500 index contains the most reputable American companies, one would think that swings in the stock market may be similar to swings in established cryptocurrencies like Bitcoin and Ether. As a meme coin that many trade for fun, we would assume that Dogecoin has enhanced volatility unrelated to established coins that would lower its predictive value. We would expect the S&P 500 to be a better indicator of Ether prices than Dogecoin because these stocks represent established entities like Ethereum and Bitcoin. However, our results showed otherwise.

Arguments could be made either way for gas fees, as high fees suggest higher Ethereum usage and value but also may deter people from using the network. These fees fluctuate and have risen considerably over the past few months. Higher demand on the Ethereum blockchain leads to increased gas fees as different users seek to outbid one another for transaction processing and verification as well as for space on a block. Similarly, high volumes traded could signal people dumping Ether and lowering the price or doing the opposite. Our model shows that gas fees and volume increase alongside Ether movements.

One study demonstrates a positive relationship between stock price swings and volume traded. However, the direction of the price change did not affect volume; the magnitude did. This finding may explain why, despite being statistically significant in our linear regression, volume plays a weak role in predicting Ether movements in our random forest model.

Our analysis reaffirms the idea that crypto markets are distinct from stock markets and not strongly correlated with them. This suggests that they may be suitable instruments for diversifying across investments. We should also be careful in overlooking the role of meme currencies’ relationships to these new markets. In this analysis, Dogecoin proved more bite than bark.