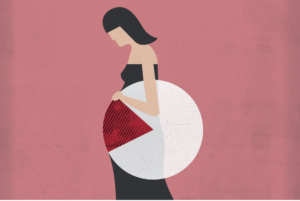 The Impact of GDP shocks on Fertility Rates

Covid-19 has introduced unknowns into our day-to-day lives and has created numerous economic difficulties. In 2020, most of the world suffered negative economic shocks as the uncertainty of a new disease stunned human societies and resulted in significant GDP downturns for many counties. In addition, economists have labeled the covid recession a “She-cession” as “less educated women with young children were the most adversely affected” (IMF). Among the many questions and concerns that have emerged since early 2020, the impact of the virus-caused shock on fertility rates is particularly interesting. In a world where falling fertility rates, and hence older average populations, were already a concern, what impact will another GDP shock have on fertility outcomes?

Birth rates have been falling in the world’s largest countries. In China, there was a 15% decline in Registered Newborn Babies in 2020, and because of this trend, “the country’s population is aging more quickly than most of the world’s developed economies, a hangover from decades of family planning policies” (Bloomberg). In the US, fertility rates have been steadily declining since the 2008 Financial Crisis, where “births have sunk below replacement level” (Miller). Generally, the belief is that recessions lead to fewer children because of financial and family hardship. A study of the Great Recession’s impact in the United States found that “in 2007, the birth rate was 69.1 births per 1,000 women ages 15 to 44; in 2012, the rate was 63.0 births per 1,000 women. That nine percent drop meant roughly 400,000 fewer births” (Brookings). Furthermore, they found that “States in which the recession was more severe experienced greater declines in birth rates” (Brookings).

Fertility rates are important because governments rely “on the next generation to finance the safety net and provide the caregivers, inventors and public servants of the future” (Miller). Increased financial instability is a significant driver in reducing the want to have children. Research has shown the positive impact of alleviating financial difficulties on fertility rates. In Spain, “a child allowance led to a 3 percent increase in birthrates; when it was cancelled, birthrates dropped 6 percent” (Bui). In Alaska, allowances had a similar impact on raising fertility rates, particularly for “Alaskan Natives; those without college degrees; and unmarried women”—which highlights the importance of financial stability on the decision to have children (Bui).

The article contributes to the line of research on recessions and birth rates by constructing a novel dataset of 150 countries and using an event study analysis to explore how fertility rates are impacted by the trough of recessions. We investigate each country’s largest GDP shock on fertility rates and consider how fertility rates change in the ten years before and after the shock. We use data from the World Bank on GDP per capita growth and fertility rate (births per woman) to approach this research question. We focus on the largest GDP downturns each country has suffered since 1960 (excluding the COVID-19 recessions) and the resulting change in fertility rates for the following decade after the recession’s trough. Our research includes the changes in birth rates for the decade prior to the trough of the GDP shock to account for existing trends. Hence, we examine our hypothesis that GDP shocks have long-term negative impacts on fertility.

After removing countries where data are incomplete, the data set includes 150 countries. The continental breakdown of the data is: 27% from Africa, 21% from Asia, 26% from Europe, 11% from North America, and 10% from South America. For each country, we identify the largest GDP downturn and collect fertility data for the 10 years before and after the identified trough. The most common years of the troughs are: 2009 for North America with 29% of the countries, 1998 for Asian countries with 19%, and 2009 for European countries with 49%. Overall, 22% of the selected shocks are from 2009. 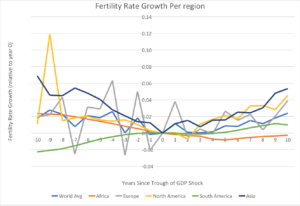 To build out the statistical analysis and control for country-specific features, we employ an event study methodology. In our regression model, the outcome variable is each country’s fertility rate growth and the controls include indicators for the ten years before and the ten years after the trough of each country’s recession. Additionally, we include country-fixed effects to capture time-invariant features of each country. We estimate the regression model using OLS. Furthermore, we run additional regressions, restricting the sample to certain continents to understand any regional findings.

The regressions results show that, relative to the year of the highest GDP downturn, the 10 to 5 years before the trough are associated with higher fertility rates. On the other hand, fertility growth the ten years after the trough is not significantly different from the year of the trough of the GDP shock. This confirms the hypothesis that GDP shocks are associated with lower fertility growth rates relative to years before the recession. In addition, the regression results underline that pre-recession birth rate growth does not recover even ten years after the trough of the GDP shock. This result is intuitive because, as shown in the research cited above, financial instability is a significant factor in an individual’s decision to have children and the financial impact of large downturns can scar for decades.

Although the majority follow the same trend, some regional regression results vary slightly from the main regression. The samples restricted to Africa, Asia, and North America all support the main results with the general period between -10 to -5 years associated with an estimated higher fertility rate growth relative to the year of the trough. However, the Asian sample results also show significant results for the period between 9 and 10 years after the trough. Relative to the trough, those results show an estimated higher fertility growth. This reveals that birth rates start to recover nine years after the GDP shock for the Asian crisis. On the other hand, the European regression results show no statistically significant findings. In addition, the South American regression demonstrates that only the 10th year before the trough was statistically significant and showed negative fertility rate growth relative to the trough, which opposes the rest of the findings. It is important to note that the sample size of South American countries is small, with only 15 countries.

The conclusion of the impact of GDP shocks on fertility rates is that business cycles influence fertility rates. It is intuitive that as individuals face financial difficulties that they are less likely to want to take on an additional financial strain in having children. It is surprising that the European sub-sample did not yield any significant results, and it would be interesting to do further research to uncover the reasons behind this. Part of this research could be an analysis of the impact of GDP shocks on fertility rates using samples separated by the economic development of countries. Would more economically developed countries experience a more significant impact on birth rates following recessions? Regarding the impact of Covid-19, it is crucial to monitor the unique impact of the pandemic. With relatively more women leaving the labor force, it will be important to monitor how this recession will impact fertility rates differently from previous GDP-downturns. Will the reduction in women in the labor force result in an even lower fertility rate growth?