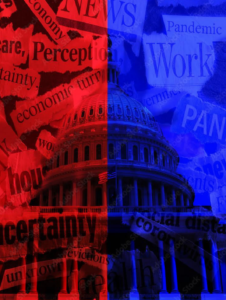 “There simply was not a strong partisan pattern to Covid during the first year that it was circulating in the U.S … Then the vaccines arrived,” a December 2021 NPR article claimed. While it is true that Republicans are vaccinated at lower rates than Democrats, are vaccinations the only reason why Republicans, on average, have been disproportionately impacted by Covid-19?

The partisan divide in Covid-19 mortality rates is not only driven by differences in behaviors, like being vaccinated, but also by the demographics of the two parties. We find that Republican voters, on average, are more likely to be older, uninsured, obese, and in poor health, which are all risk factors for dying from Covid-19. Democrat voters, on the other hand, are more likely to be Black, Hispanic, or Native American, which are also correlated with higher Covid-19 mortality rates.

Setting these underlying differences aside, we find that even before the vaccine arrived, residents of Republican voting counties experienced higher mortality rates per 100,000 people than residents of Democrat voting counties. Specifically, from July 2020 until July 2021, there were 11 more deaths per 100,000 people when Republican vote share increases by 10% (t = 8.73). Even though the divide between Republicans and Democrats continued after vaccines became widely available, vaccination rates must not be the only dividing factor in Covid-19 mortality rates.

Social distancing, mask wearing, and attitudes toward Covid-19 divided Republicans and Democrats since the beginning of the pandemic. ​​In July of 2020, only 46% of Republicans, in contrast to 85% of Democrats, said that Covid-19 was a major threat to the health of the U.S. public. Consequently, Republicans were less likely than Democrats to practice social distancing, follow the social distancing orders after the state-wide policy enactment, and search for information about Covid-19. These behaviors increase the risk of contracting the Covid-19 virus.

Many scholars attribute the partisan divide in Covid-19 beliefs, attitudes, and behaviors to President Trump’s rhetoric. Trump stated without evidence that Covid-19 “affects virtually nobody” at a campaign speech in Ohio in September 2020.  He even admitted to understating the health threat of Covid-19, commenting in an interview released in September 2020 that “I wanted to always play it down. I still like playing it down, because I don’t want to create a panic.” As Republicans were more likely to assign credibility to the advice of Trump instead of other state officials, many Republicans took Trump’s words seriously, creating a lasting partisan divide in beliefs about the pandemic.

We find that after the vaccine became widely available, residents of Republican voting counties continued to experience higher mortality rates per 100,000 people than residents of Democrat voting counties. However, the gap between Republican voters and Democrat voters narrowed slightly. Between July 2021 and February 2022, there were 10 more deaths per 100,000 people when Republican vote share increases by 10%, holding other confounding variables constant (t = 17.98).

Beliefs and behaviors formed by many Republicans early on in the pandemic likely continued after the vaccine became available and likely even contributed to low vaccination rates among Republican voters. However, as individuals who had Covid-19 in prior waves have antibodies that prevent them from contracting it for at least the following two to three months, it is possible that hotspots in previous waves won’t become hotspots shortly after. This could be one of the reasons why the partisan gap shrinks slightly.

Unvaccinated adults are more than three times as likely to lean Republican than Democrat, finds a KFF poll. Vaccines, which are instrumental in preventing the spread of Covid-19 and severe symptoms from the virus, are likely part of the reason why Republican voters still experience higher Covid-19 mortality rates. Many blame vaccine disinformation for the low rates of vaccinated Republicans. Disinformation about the necessity and safety of the vaccine reaches Republicans at a far greater rate than Democrats.

To measure the effect of each wave of the pandemic, we used Covid-19 deaths per 100,000 people by U.S. county data from the New York Times Covid-19 database. summed the deaths per 100,000 people during the time period of each wave. The time period for each wave was based on dates given by The Pew Research Center. Republican vote share by County was measured using MIT Election Data from the County Presidential Election Returns in 2020. We used 2019 U.S. census data to calculate percent Black and Hispanic residents as well as percent of residents age 85 years or older, holding these variables constant in our regression. We also used average home value data in 2021 by county from Zillow as a proxy to control for income our regression. Finally, we calculated the percent of residents in poor health, uninsured, and obese in each county from the 2022 County Health Rankings National Report.

The Covid-19 vaccine became widely available at the beginning of the fourth wave. In July, 51% of Republican voters were not vaccinated, in comparison to 23% of Democrat voters. The vaccination gap, as well as the continued trend in social distancing behavior, is likely the reason why the gap continues through the fourth wave.

While the partisan gap in Covid-19 mortality rates still exists in the fifth wave, it appears to be shrinking as the pandemic wanes.

Evidently, the vaccine was not the only behavior that drove the partisan divide in Covid-19 mortality rates. Adherence to Covid-19 policies, such as mask wearing and social distancing, likely played a large role in the higher mortality rates experienced by residents of Republican leaning counties.