April 1st marks the start of Second Chance Month. President Joe Biden addressed the nation and emphasized that the United States is a country of second chances. With over half a million people released from prison every year, Biden properly acknowledges the importance of promoting second chances. Furthermore, 70 million Americans suffer from criminal charges that impede their employment opportunities. The problem of prisoners and those who return to prison is real, and an issue that needs to be addressed.

Recidivism can shape lives and communities, determining if one faces the criminal justice system again. It refers to an individual’s relapse into criminal behavior after the person has served their prison sentence. It is measured as criminal acts that resulted in re-arrest, re-conviction, or return to prison with or without a new sentence during a three-year period following a person’s release.  Recidivism rates have historically been high in the United States, with several studies reporting that more than 60% of former prisoners recidivate. Recidivism has become known as the “revolving door” in and out of prison. It is closely related to and significantly affects other important criminal justice topics.

In my analysis, I find that job opportunities, drug use, gang affiliation, and geographic location are strong correlates of recidivism. This analysis is based on data from The National Institute of Justice (NIJ) which includes roughly 26,000 individuals from the State of Georgia released from Georgia prisons on discretionary parole between January 1, 2013 and December 31, 2015.

My analysis starts with a few simple figures. Figure 1 shows that in the data I analyze, African Americans are more likely to recidivate relative to Causcaians. 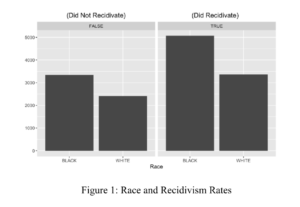 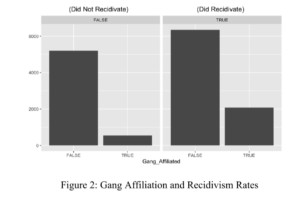 Figure 2 shows that having a gang affiliation also leads to higher rates of recidivism. The chart also indicates that while the majority of prisoners are not in gangs, a substantial minority are. Gang violence drives many arrests in large cities, so it is clear that the proportion of gang members in prison will be higher than the proportion of gang members in the general population.

In order to analyze the variables in my dataset jointly, I use a multivariate linear regression framework. Linear regressions are helpful to better understand the variables that collectively influence recidivism rates. The analysis indicates several statistically significant variables.

Based on my analysis, ideal recidivism programs should focus on employment, drug use, gang affiliation, and geographic location. For employment, perhaps individuals newly released from prison should receive some sort of capital or social job opportunity. For drug use, individuals should be offered rehab programs. Racial equality will continue to remain an important ambition of states and societies, and that especially applies to prisons. For geographic location, perhaps the state can work toward equality of opportunity across communities. Working with, rather than against, newly released prisoners can facilitate a positive feedback loop. Promoting the good rather than preparing for the bad is the solution to lower recidivism rates.