Skip to content
HomeUncategorizedWhat’s the Effect of Increasing the Felony Theft Threshold? 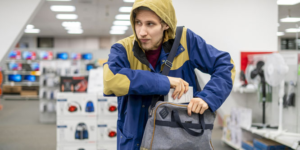 Recently, news outlets have shown videos of people stealing from stores and freely exiting the building with no punishment. It begs the question as to how all these people are stealing in broad daylight without facing punishment from the store or police. One potential hypothesis for this open stealing in stores relates to the felony theft threshold, which is the value of stolen goods at which one will be prosecuted as a felony rather than a misdemeanor (the threshold differs by state, ranging from $200 to $2,500). Prior coverage has made it clear that larceny theft is decreasing, and argued that raising the felony theft threshold is correlated with a decrease in crime rates. We investigate whether raising the felony theft threshold has had a negative impact on retail theft rates.

To answer this question, we gathered data for the theft-rate per capita by state from 2000-2020 and state-by-state changes in the felony theft threshold within these years. This theft is formally known as larceny theft, which is unlawful taking, carrying, leading, or riding away of property from the possession or constructive possession of another. These data do not capture robbery and burglary data, as these include violence and forceful entry. Figure 1 display an event study on the effect of changing the theft threshold on larceny theft crime rates. The x-axis is centered on the year the state increased the felony theft threshold tracking from four years before to four years after the change. Only states that increased the threshold within the sample period are included in these figures. 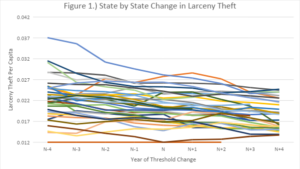 From these figures, we can see that larceny theft is decreasing. When the threshold increases in year N, crime continues going down. There are some outliers, like Vermont, South Dakota, and Arkansas with increases after the threshold increases, but even in these cases, the overall crime rate is lower four years after the change that it was four years prior. New Hampshire is the lone state in which theft increased over the 8 year-period encompassing the policy change. The general impression is that increasing the felony theft threshold is not leading to an increase in crime.

To follow-up on the graphical analysis, we analyzed the relationship between larceny theft per capita and the change in theft threshold while allowing for there to be nation-wide spikes in particular years (such as the bump in crime in 2020) and allowing for each state to have its own average (Arkansas has higher theft rates than Tennessee). We repeat the analysis for three separate measures of the theft threshold to be sure that our results are not simply due to use of one measure. No matter the measure, we find no significant effect of the theft threshold on the larceny theft rate. Indeed, the effect is a mere three hundredths of a percentage point of the average larceny theft rate per capita. In short, any causal effect is clearly negligible. However, before concluding that felony theft thresholds have no deterrent effect on larceny, we must consider two significant caveats.

First, decreasing crime rates as we increase the theft threshold does not mean that the total value of stolen merchandise is diminishing. Perpetrators may be stealing much more merchandise per incident than in previous years. Unfortunately, there is no way to analyze this margin without data from the private sector. On quarterly earnings transcripts, Kroger’s, Best Buy, and Walgreens blamed retail crime as a factor for their decreased performance in recent quarters, suggesting volume may be on the rise.

There is also an issue of selection bias, as stores are more likely to report crimes that pass the felony threshold. Indeed, many of the crimes that are reported in the data are felonies. If a rise in the threshold reduces the likelihood that a crime is reported, we may be missing a concomitant rise in crime that does not meet the threshold.