Skip to content
HomeUncategorizedWho Is More Likely to Report an Income Loss?

Understanding who is more affected by the economic crisis has important implications for directing resources and designing targeted recovery policies. For example, although most recessions, including the 2008-2009 recession, hit males harder, early evidence pointed out that the economic fallout following the Covid-19 pandemic would hit females more. An NBER working paper by Alon et.al provided two reasons for this: the social distance restrictions have a large impact on industries where the female workforce is concentrated, and school closures increase childcare needs which still tend to be met by mothers more than fathers. The differential impact extends to minorities as well. A Pew survey conducted August 3-16 found that relative to white people, Black and Hispanics were more likely to report they have been laid off or had to take a cut in pay.

In order to shed light on the heterogeneous impact of the Covid pandemic and how this impact is changing over time, the Lowe Institute surveyed 2000 Californians in June, and another 2000 Californians in September, asking whether they had lost income due to Covid-19. The responses were fit using a probit model while controlling for work status, education, income, gender, age, ethnicity, and size of the responder’s company/employer.

In June, African Americans were 10% points more likely than Caucasians to report an income loss. At the time, women and Hispanic did not report losses at higher rates than men and Caucasians. At the same time, we found an “insurance” effect of working for a corporation with more than 500 employees. After controlling for other factors, employees of larger corporations were 11% points less likely to report an income loss than peers working for small companies. This may be explained by differences in liquidity on hand to keep paying salaries. Survey work by the Inland Empire Economic Council found that small businesses averaged 4 weeks cushion while large businesses averaged 3 months.

By September, our results indicate that ethnic gaps had widened. Relative to Caucasians, African-Americans were 15 percentage points, and Hispanics 13 percentage points more likely to report an income loss with the model controls. Moreover, the “insurance” effect of working for a large corporation decreased to only about 6.6 percentage points relative to corporations with less than 500 employees.

Looking into the predicted probability of reporting an income loss which are obtained from the fitted values of our probit model also documents the widening ethnic gap and shrinking insurance effect of working for a large corporation from June to September. 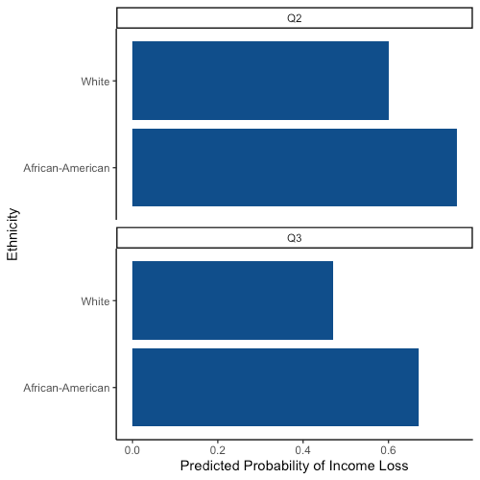 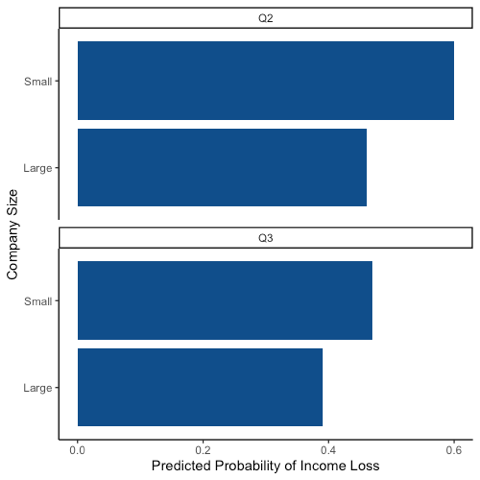 As the economy remains in limbo, with reopening delayed, and the concomitant revenues failing to materialize, even large businesses have had to lay off workers. The recent Disney layoffs are merely the most visible example of what is clearly a widespread phenomenon.

Yet while employees of large firms have come to experience the same uncertainty that their small firm counterparts felt from the beginning, there remain persistent differences across industries and occupations which translate into differences across ethnicities. Past recessions have typically hit minorities harder than whites. True to form, the 90% economy of the pandemic has led to a gap between whites and minorities that seems to be deepening as the recession lengthens.