The U.S. – Mexican avocado trade has proven to be a lucrative business, with some estimates for the total avocado earnings as high as two billion dollars. Roderic Camp, Philip M. McKenna Professor of the Pacific Rim at Claremont McKenna College, emphasized the new role of organized crime in the avocado trade, stating that “they are taking over economic activities which involve much less risk with high economic returns.” Organized crime groups are now confronting avocado farmers in Michoacán, which produces half of the avocados consumed world-wide.

Farmers are made to pay protection money. Compliance is ensured with kidnapping threats. The wide availability of America’s trendiest fruit clearly comes with a bloody price.

According to official statistics, kidnappings in Michoacán increased 88% between 2016 and 2019, though, according to Professor Roderic Camp, it is estimated that only 2% of all kidnappings are reported. Mexican newspaper, El Sol de Moriela, reported that kidnappings in Uruapan, an avocado farming area inside Michoacán, doubled between 2015 and 2019. 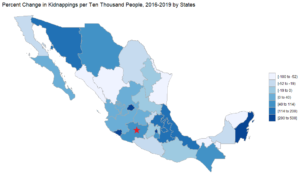 Why has avocado farming suddenly become such a dangerous business?

Before NAFTA allowed imports of produce like avocados to freely enter the U.S. from Mexico, American production of avocados was constrained by their fussy growing needs, requiring exact salinity levels, perfect humidity conditions, and a stable temperature of 72 degrees. This ideal climate for avocados is challenging, even California’s production is limited to the months of September through February or March. San Diego and Ventura counties, the only domestic environments that can reliably produce these conditions outdoors, produce ⅔ of all avocados grown in the United States. By comparison, many ecosystems in Mexico, like Michoacán’s, have an ideal climate and terrain for avocado farming, allowing for year round production. 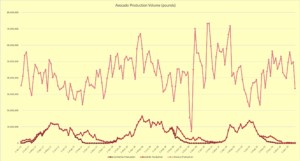 Demand for the nutritious fruit has soared in recent years. According to the USDA, per capita use doubled since 2007, when Mexico began exporting avocados to the U.S.

As California farmers struggle to keep up with the rising demand for avocados, U.S. grocery stores line their shelves with substantial imports from Mexico. In 2018, the U.S. imported 2.29 billion pounds of avocados from Mexico, Chile, Peru, Dominican Republic, and Columbia.In 2018, Mexico exported just shy of 2 billion pounds of avocados to the United States. Mexico’s immense shipments to the U.S. avocado market, however, comes with dangerous consequences.

The United States isn’t the only country fueling the “blood avocado” industry. China and Japan both formed relations with Chile and Peru to ensure a steady supply of the highly valued produce. Chinese avocado imports increased more than a thousand fold between 2011 and 2017, according to the Chinese news agency Xinhua.

U.S. consumers are starting to feel the joint burden of rising corruption in Mexico and water shortages. The average selling price of avocados in U.S. supermarkets has risen 14% since 2013. 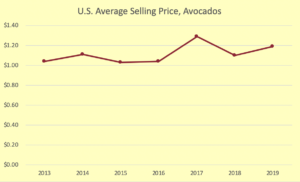 From decadent avocado toast on every brunch menu to guacamole as a party staple, avocados have quickly become America’s favorite fruit ‒ but not without attracting the attention of violent organized crime groups. Avocado lovers might consider the hidden price when next at the supermarket.