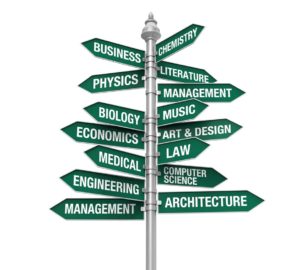 As we celebrate Claremont McKenna College’s 75th Anniversary, we take a look at the history
of student majors since the school’s inception in 1946. This exciting anniversary gives us an
opportunity to explore student demand for particular subjects and how this demand has
changed over time. CMC’s major offerings is part of what makes CMC standout from not only
other liberal arts colleges, but all colleges in general.Today, CMC offers 33 majors and 11
sequences with the opportunity to pursue majors and sequences at any of the 5 schools in the
Claremont Consortium.

To begin, Economics has been the most common major at CMC since the 1960s. In the data,
the title “Economics” encompasses major titles such as “Economic Theory”, but not “Economics-
Accounting”. In 2020, 25.86% of students were majoring in Economics. We observe years
where nearly half of the graduating study body majored in Economics. The Political Science or
Government major is another highly demanded major at CMC. Over the years, the name of the
major changed from “Political Science” to “Government”. The major had its highest percentage
of graduates in the 1960s and 1970s, aligning with the intense and stressful political
involvement of the United States during this time period with the Cold War, Vietnam War, and
humanitarian crises. Following 2007, demand for the major has been on the decline, with only
7.79% of the student body declaring Government as their major in 2020. This decrease may be
credited to the gradual rise in both the Economics as well as the Computer Science major.
The Computer Science major has witnessed a rapid increase in demand in the last decade. This
finding aligns with job market trends, where employers increasingly desire skills in computer
science. In 2020, there were as many Computer Science majors (7.79%) as there were
Government majors.

The Psychology major represents a major with relative consistency over the years. Interestingly,
the introduction of CMC as a co-ed college in 1976 had little to no immediate impact on the
percentage of Psychology majors. In fact, the participation in the major seemed to decrease
through the 1980s before stabilizing in the last couple of decades.

The Literature major at CMC, although generally in low demand, has been on a relatively
consistent decline since 2000, with only 1.25% of graduates in 2020 declaring Literature as their
major. Colleges across the United States have experienced a similar decline in humanities
major participation in recent years. A possible explanation for this is the decrease in job
opportunities in the field accompanied by the increase in job opportunities in technology-related
fields.

Finally, we consider the Environmental Studies major, which comprises both Environmental
Analysis and Environmental Science. As relevant today as ever, the major was relatively
nonexistent at CMC before the 21st century. Since then, it has fluctuated but remained under
6% of graduates’ majors. Although the graduates of 2020 comprised only 2.18% of
Environmental Studies majors, the trend of the last two decades indicates rising numbers.
The figure also displays an overall decrease in the 11 majors depicted. This is likely attributed to
the increase in the total number of majors available for students to choose from. In 1980, only
20 majors were offered at CMC; today, there are 33. Other common majors that were not
included in our analysis include Biochemistry, Management – Engineering, Science
Management, and Media Studies.

The 75th Anniversary of CMC marks a significant benchmark in the college’s history. A look at
the popularity of majors over time indicates trends pertaining to national interests and market
demands. It will be fascinating to explore the continuation of major trends as CMC nears other
benchmarks in the future.