On average, women’s experience in Mexico has improved in the last ten to twenty years when we look at factors such as education, economic activity, and representation in business and government. However, the percent of women experiencing emotional, physical, sexual, or economic violence has increased in several Mexican states from 2006 to 2016. Even as women are improving economically, violence toward them is on the rise.

The study focuses on six different Mexican states: Baja California Sur, Campeche, Chiapas, Mexico City, Nuevo Leon, and Quintana Roo. The states were chosen based on their GDP growth from 2003 to 2019. Campeche and Chiapas had negative and small growths, respectively. Nuevo Leon and Mexico City experienced moderate growths, while Quintana Roo had a growth rate of 98% and Baja California Sur of more than 100%. Apart from their economic differences these states vary vastly in population. Campeche and Baja California Sur, for example, have less than 1 million inhabitants while Mexico City has about 8.9 million. Chiapas and Nuevo Leon have a population of about 5 million each and Quintana Roo of about 1.5 million. In order to uncover whether or not women’s experience in Mexico has improved in the past two decades, roughly, we calculated the growth rates of different factors such as the average number of years of formal education between men and women, the percentage of men and women who do unpaid labor, the percentage of women in business and government, and the percentage of women who have experienced different types of violence.

Despite the vast differences in the growth of economic activity between the states from 2003 to 2019, the states shared improvement in three of the four indicators of women’s progress: education, unpaid labor, and representation in business and government. For instance, all six states studied witnessed a decrease in the gap between men and women’s average years of schooling by about 0.2 years from 2000 to 2015. Across the states, women are getting more educated, they are not doing as much unpaid labor, and they are more prevalent in business leadership positions and government. The violence indicator, however, does not show such commensurate improvement. 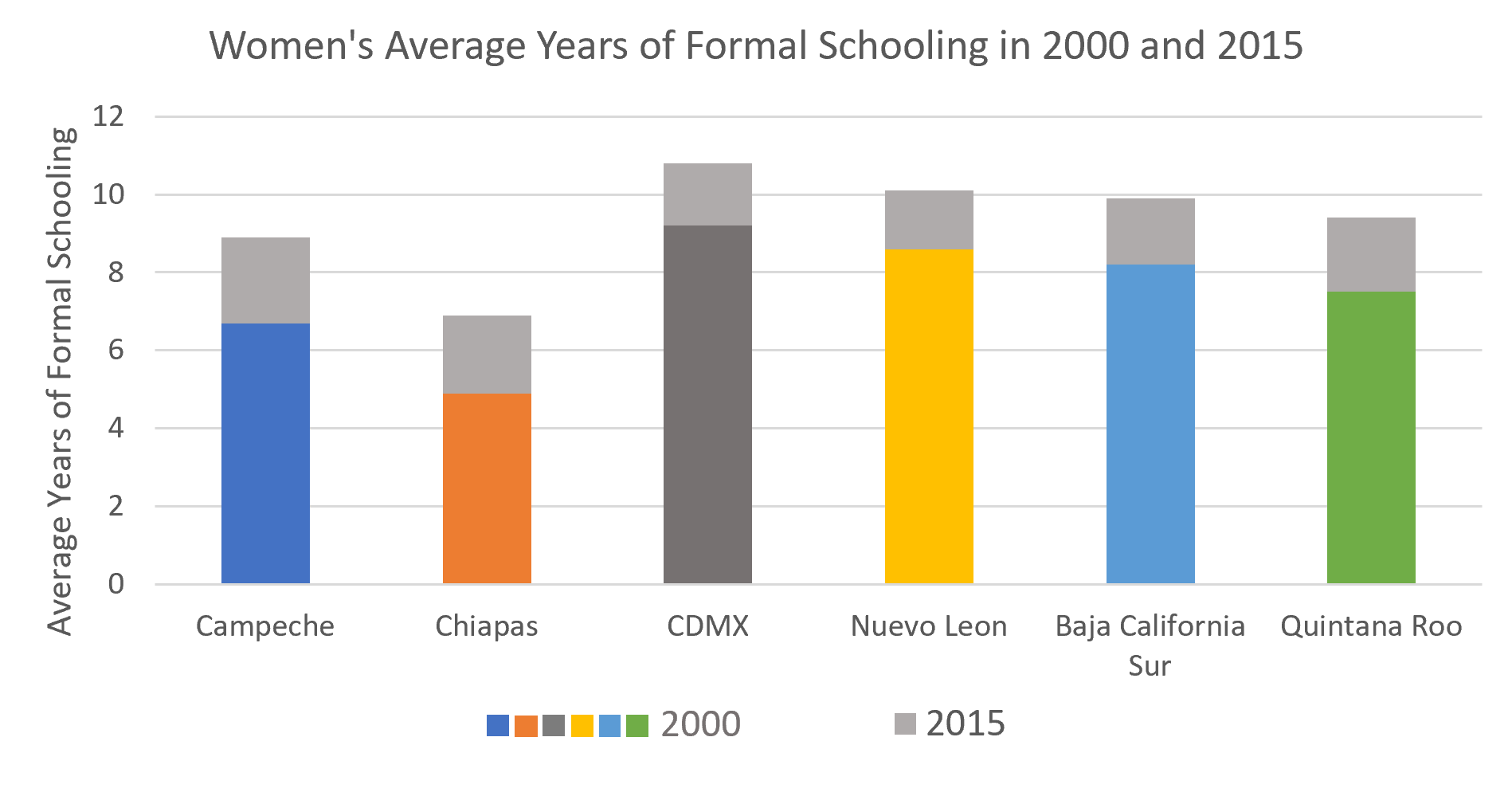 For economic, physical, and sexual violence, the trend is what one would expect: the states with the greatest economic growth rates, such as Baja California Sur and Quintana Roo, saw smaller growth rates for these types of violence than states like Campeche and Chiapas. When observing emotional violence, however, the opposite is true. As the following graph illustrates, the rate of change of the percentage of women experiencing emotional violence is greatest in the states that have the largest growth rate of economic activity: Baja California Sur and Quintana Roo. 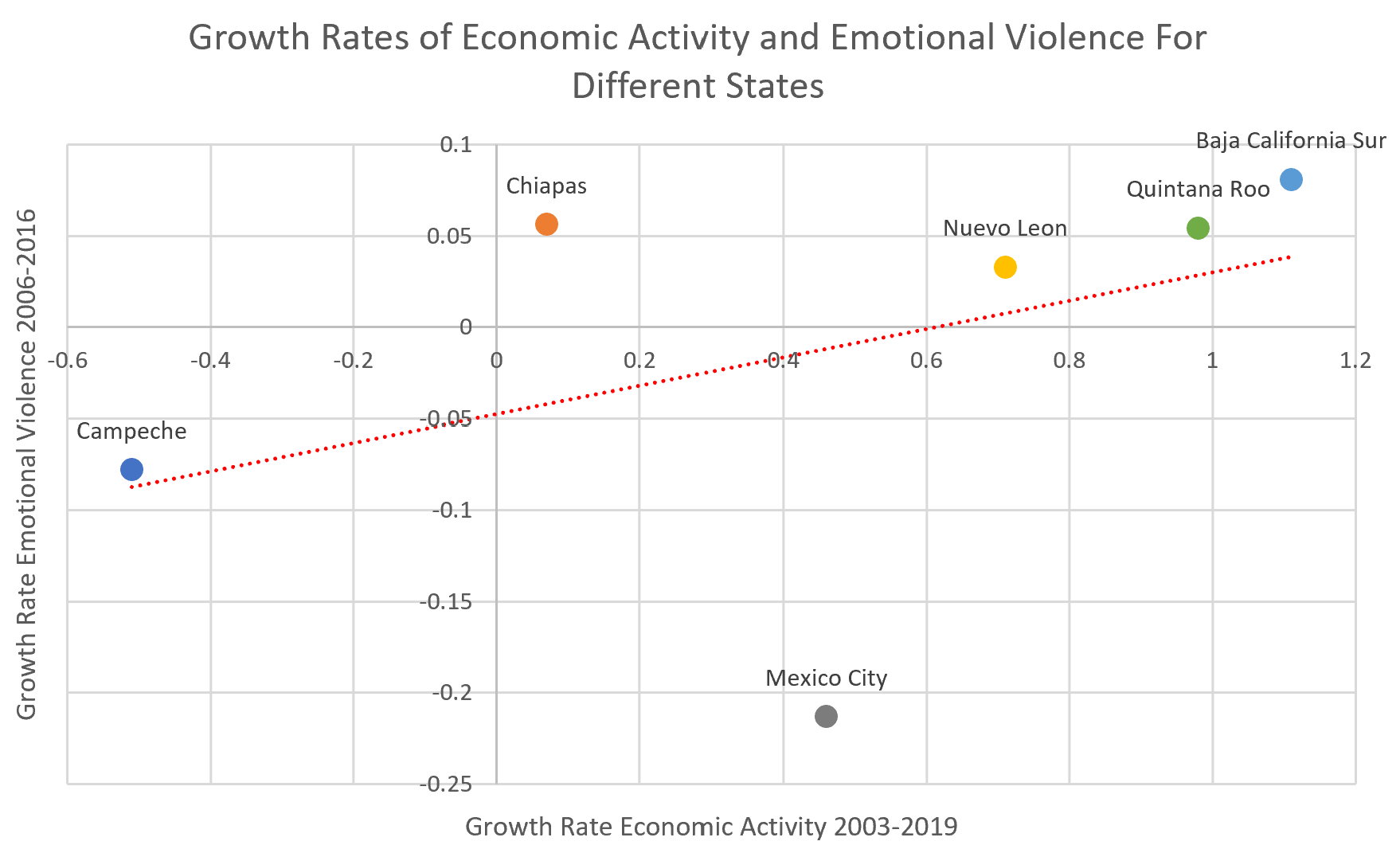 One explanation for the tendency of growth in economic activity and emotional violence could be that the improvements of women’s status in society is changing more quickly than the cultural norms. The increase in women’s education, their representation in business and government, and their participation in the economy is creating pressure in the societal dynamic which might be inciting violence from males that feel challenged by the stronger position of women in Mexican society. Further research is needed to determine a causal relationship between the rise in economic activity and the rise of emotional violence against women. Perhaps, a similar trend could be observed in other Mexican states, and other developing countries as well.