One of the best ways to prevent car crashes is to keep unsafe drivers off the road. Following this logic, many states institute restrictions on the renewal of elderly persons’ driver’s licenses. The Lowe analyzed whether or not three of the most popular restrictions are correlated with a decrease in fatal car accidents involving elders. We found a modest positive association between two of the three most popular restrictions and a decline in elder-involved accidents.

As the Baby Boomer population ages, the number of senior drivers is expected to grow with an increasing number of older people keeping their licenses. No state has put a strict age cap on driving, but many states have put controls on license renewals for those over 65. Age-related health conditions certainly negatively impact driving ability. However, older drivers are getting in fewer fatal collisions as the years go by. Since 1997, the number of fatal crashes involving over70 drivers has fallen by 15%.

The following map represents how many (0 through 3) policies each state in 2009 had implemented. We grouped each state into one of the four policy number categories to see which states were most and least restrictive.

We investigated the fatal accident rate (fatal accidents per million miles driven) in different age categories across states, comparing states with and without each type of regulation. For each of the three types of restrictions, the graphs below show the fatal accident rates of different age categories in states with and without the restrictions. Across all age groups, there is a clear gap indicating more safety in states with the restrictions. It is critical to remember, however, that these policies only apply to elders. It is possible that states that adopt the elder-focused policies tend to be more urban and thus have fewer dangerous two-lane country roads. The restrictions are unlikely to have caused the overall gap. To judge the efficacy of the policies, we must investigate the gap in the high age range–does it widen relative to the already existing gap? If so, then perhaps the policies are effective. Here, we see that vision tests and mail-in restrictions are correlated with a widening of the gap for elders—among both states with and without the restrictions, accident rates are higher for older drivers, but more so for those without the restrictions. It seems these two policies may be effective. On the other hand, requiring drivers to renew more frequently has no such salutary effect.

In sum, we find some evidence that vision tests and restrictions on mail-in renewal are associated with lowering fatal accident rates among the elderly. 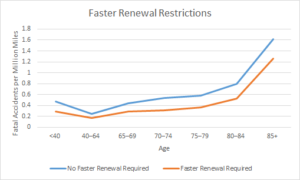 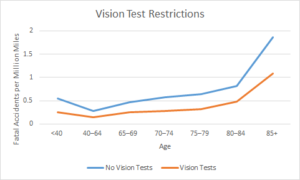 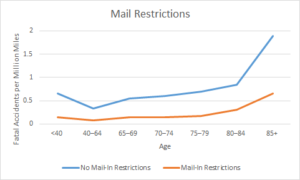