Skip to content
HomeBusiness CyclesLooking Ahead: Is a Recession on the Horizon?

We are currently enjoying the second longest expansion since the end of WW II and the national unemployment rate, standing at 3.7% for October, is at a 49-year low. So why do so many professional economists believe the expansion is likely to end soon? According to a Wall Street Journal survey conducted in May, almost 60% of private-sector professional economists expect a recession by 2020, and over 80% forecast a recession by 2021. What could underpin such a gloomy future prediction?

Unemployment is low and still declining without any sign of a significant commensurate rise in inflation. In March of 2015, the Fed had estimated the natural rate of unemployment—the point below which higher labor costs lead to an acceleration in inflation—to be 4.9%. But the continued quiescence of inflation despite seven straight months of unemployment below 4% has allowed the Fed to let the expansion to continue without attempting to slow down the pace. Past expansions have managed to sustain peak employment levels for long periods of time. For example, before the 1970 recession, consistently low rates of 4% were sustained for over 4 years and similarly low rates of 5% persisted before the 2001 recession for over half a decade. Thus with the natural rate of unemployment seemingly low, and no signs of inflation on the horizon that would precipitate contractionary monetary policy, there is no cause for pessimism on this front.

What about the October swoon of U.S. stock markets? On October 3rd, the Dow was at an all-time high of 26,951 points, and the S&P also reached a record high on September 20th. However, at the end of October, both declined significantly. While it is certainly true that stock markets tend to predict a future economic decline, this leading economic indicator has many false positives in forecasting recessions. In February of 2016, CNBC looked at the previous prediction record of the stock market and found that “stock markets have predicted 13 out of the last 7 recessions.” This high incidence of false positives suggests the stock market sell-off is not by itself a reliable indicator of a future downturn.

Consumption expenditures make up roughly 70% of overall economic spending in the United States. As a result, recessions can easily arise from a decline in consumer confidence. But recent data on nation-wide consumer sentiment looks good; it is currently at a high that has not been reached since January of 2004. And while consumer sentiment is volatile, the most recent data clearly continue the upward trajectory of the past several years.

So if neither labor markets nor consumer sentiment nor stock markets reliably point towards a recession, what could possibly feed these widespread predictions of an impending recession within a few years?

Perhaps the most reliable measure of a future downturn is the shape of the yield curve. Specifically, the difference between the yields on long-term (10-year) Government bonds and short-term (3-month) Treasury Bills. An inversion of the yield curve, which occurs when the yield on the short-term interest rate rises above the long-term interest rate, is commonly thought to presage a recession. While currently the yield curve is not inverted, and 10-year Treasuries (3.06) are comfortably above 3-month Treasuries (2.29%), long-term rates are not rising one-for-one as the Fed tightens, causing a shrinking (though admittedly fluctuating) gap between the two curves since 2009. When an inversion occurs, a recession typically sets in within a year. Should this current trend continue, a recession may be on its way though it seems like it still is quite some distance in the future based on the time it will take for such an inversion to happen. While this does predict a recession for some point in the future, it may be sometime beyond 2020 or 2021.

Perhaps what really is occurring is that our current period of economic expansion is just so long that economists are wary that it will continue to last much into the future. In this case, we might begin to see consumer confidence drop in the near future as people expect a recession due to such an extended period of economic growth. This is a misconception though, as there is no correlation between the length of an expansion and the percentage decline of real GDP during the previous recession. The chart below plots, for the 11 expansions since WWII, the length of the expansion in quarters against the cumulative drop in real GDP in the recession immediately preceding this recession. The cloud clearly shows no significant relationship between depth of recession and the length of the subsequent expansion, further evidence that there is no inevitable length of an expansion; no reason for an expansion to die of old age. 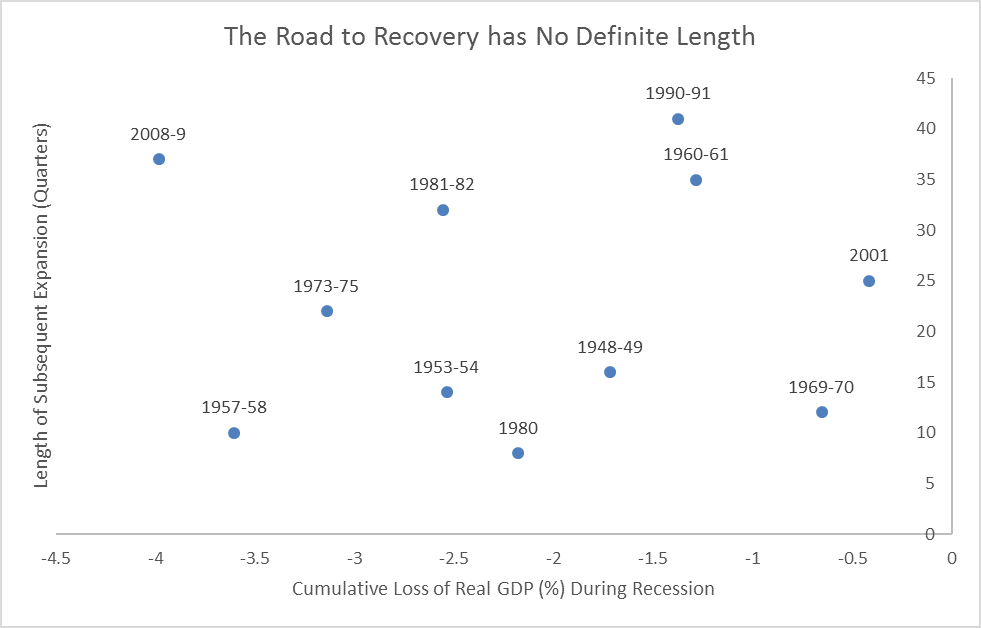 While certainly, there is some reason to think that a recession might be occurring in the future based on the yield of the long-term and short-term Treasuries, believing that a downturn will happen as soon as 2020 seems to be unlikely when combined with the 14-year record high levels of consumer confidence, and the record low unemployment rates currently experienced. For now, continue to enjoy the good economic times.