January 1st, 2020 will not only mark a new decade, but for animal rights enthusiasts it will mark the one-year anniversary of the enactment of California’s Assembly Bill No. 485, which requires all dogs, cats, and rabbits sold in California pet stores to be sourced from animal shelters or rescue groups.

Although California is not the first government to place restrictions on the sale of pets, as some cities and even the state of Maryland have effectively banned all pet store sales, it is the first government to regulate where pet stores can obtain their pets. As shelters/rescue groups across the US continue to explore strategies to reduce euthanasia rates in their communities, and pet stores have come under scrutiny from animal rights groups because of their methods of acquiring animals to sell, it’s worth assessing whether AB No. 485 has had any notable impacts in California.

Back in late 2017 when the bill was introduced into the California State Assembly by Patrick O’Donnell (D-Long Beach) it gained almost unanimous approval in both the California house (65-3) and the senate (53-0), and shortly thereafter signed into law by then-Governor Jerry Brown. AB No. 485 directly states:

“This bill would prohibit, on and after January 1, 2019, a pet store operator from selling a live dog, cat, or rabbit in a pet store unless the dog, cat, or rabbit was obtained from a public animal control agency or shelter, society for the prevention of cruelty to animals shelter, humane society shelter, or rescue group, as defined, that is in a cooperative agreement with at least one private or public shelter, as specified.”

Additionally, the bill requires stores to record and report where they acquired their pets.

“The bill would require each pet store to maintain records sufficient to document the source of each dog, cat, or rabbit the pet store sells or provides space for, for at least one year, and to post, in a conspicuous location on the cage or enclosure of each animal, a sign listing the name of the entity from which each dog, cat, or rabbit was obtained, and would authorize public animal control agencies or shelters to periodically require pet stores engaged in sales of dogs, cats, or rabbits to provide access to those records.”

The law effectively brings an end to the secret practice of pet stores sourcing their pets from mills, commonly known as puppy or kitten mills, which is a type of commercial breeding facility where juvenile animals are often raised in cramped and filthy conditions. Not surprisingly, these breeding facilities have drawn considerable criticism from animal rights groups that argue that mills cause lasting health and psychological problems for the animals bred there. Customers purchasing a pet now receive complete transparency on what organization/entity their animal was obtained from.

Additionally, the law serves to reduce the number of pets that are euthanized by shelters by providing more pathways for pets to be matched with potential owners. According to a study by the Best Friends Animal Society, California shelters killed the second most cats and dogs in the US at 111,000—the first being Texas at 114,000. It’s important to note that the number of pets euthanized in each state does not necessarily correspond to a high euthanasia rate for that state. In fact, a figure created by Shelter Animal Count suggests that Alabama and Louisiana might be the worst offenders: 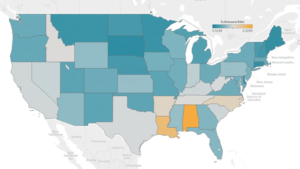 Both Louisiana and Alabama kill nearly 30 percent of pets that are brought into their shelters/rescue groups. On the other hand, California euthanizes only 15 percent. Nonetheless, as one can see by Figure 1, that percentage is significantly larger than most states where euthanasia rates are well below 10 percent.

However, AB No. 485 may be showing some promise at reducing the euthanasia rate for shelters in California. Figure 2 indicates that euthanasia rates in pet shelters in both California and the rest of the US have been on a steady decline from 2016-2019, but California has experienced a slightly steeper decline at -1.6 points per year while the rest of US is at -1.0 points. It’s important to note that though the law went into effect at the beginning of this year, pet stores likely changed where they source of their pets only shortly after the bill was passed in late 2017. 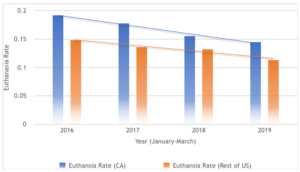 Figure 2: Euthanasia Rate in the first three months of the year (data for all of 2019 has yet to be released)

It is difficult to directly attribute the decrease in California’s euthanasia rates to AB No. 485 because reports have concluded that the increasingly common practice of spaying/neutering stray animals has been effective at reducing kill rates in shelters over the past decade. Nonetheless, there has been an apparent shift in society’s attitude toward pets entering shelters. Gross intake has been relatively steady over the analyzed time period and given shelters/rescue groups have reported more live outcomes for their pets year after year, we can conclude that increasing effort has been put into connecting rescue animals to potential owners. This effort is paying off.