We are by now all familiar with the fact that many of the middle class jobs of the 20th century have been outsourced or automated. It is also commonplace to read lists of which occupations are most vulnerable to the next wave of automation. And while Covid-19 has reduced trade and may even reverse some outsourcing, it looks likely to speed up automation. But just because a job seems routine and ripe for automation does not mean a business will necessarily bring in the robots.

Each quarter from 2019 Q2 to 2020 Q1, the Lowe Institute asked 2000 California residents if during the last year their company had replaced jobs like theirs with robots or computers. Among full- and part-time workers, we found that younger workers were far more likely to answer in the affirmative. 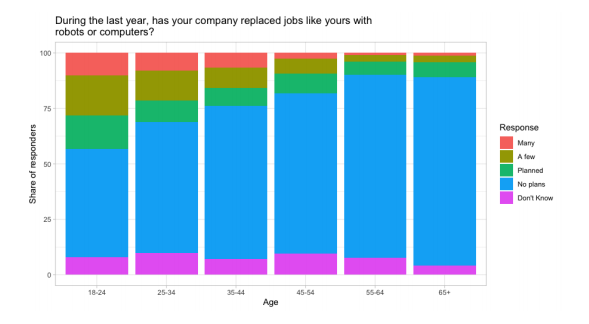 Among those aged between 18 and 24, 43% said that it was either happening or planned. Fewer than half of responders in the youngest group reported their company had “No Plans” for job replacement with robots or computers. By contrast, a dominant 83% of responders aged between 55 and 64 indicated their firm had “No Plans” to automate jobs like theirs. There is a clear age pattern in the responses: at each step up in age, a smaller fraction of workers believe their firm is automating jobs like theirs.

We can compare these numbers to a 2019 study by the Brookings Institution of which jobs, based on the description of their tasks, are most susceptible to automation. That study found 49% of jobs held by workers aged 16-24 susceptible, citing their “dramatic overrepresentation in automatable jobs associated with food preparation and serving.” Meanwhile, all other age categories were essentially tied at 40%. Their estimated vulnerability persists steadily at all age categories while our respondent’s perceived vulnerability tails sharply among older workers. The difference comes down to methodology and might give a glimpse into which jobs tend to be automated.

The Brookings study analyzed the extent to which the tasks of any given job are routine and thus automatable. By contrast, we asked current job holders which tasks are actually being automated at their firm. Brookings’ results tell us that while the youngest are most likely to perform routine tasks, such routine, automatable tasks are common among all age groups. Our results tell us that despite this seemingly equal potential for automation across all age groups 25 and older, jobs held by older workers are less frequently automated.

There are many potential causes for the seemingly lesser willingness to outsource routine jobs performed by older workers.

It may, of course, simply be that older workers are less aware of the automation that is happening. Another possibility is that older workers tend to have more power within a firm. Management positions are unlikely to be classified as routine and under threat of automation, but perhaps managers, who skew older, are reluctant to automate the jobs of their own cohort. More likely, job descriptions that seem routine to broad classification actually afford the development of tacit knowledge and intangible skills that cannot be automated. As a worker gains more experience with the firm, their role expands to perform tasks beyond their bare job description, meaning they are not as automatable as they might seem to Brookings.