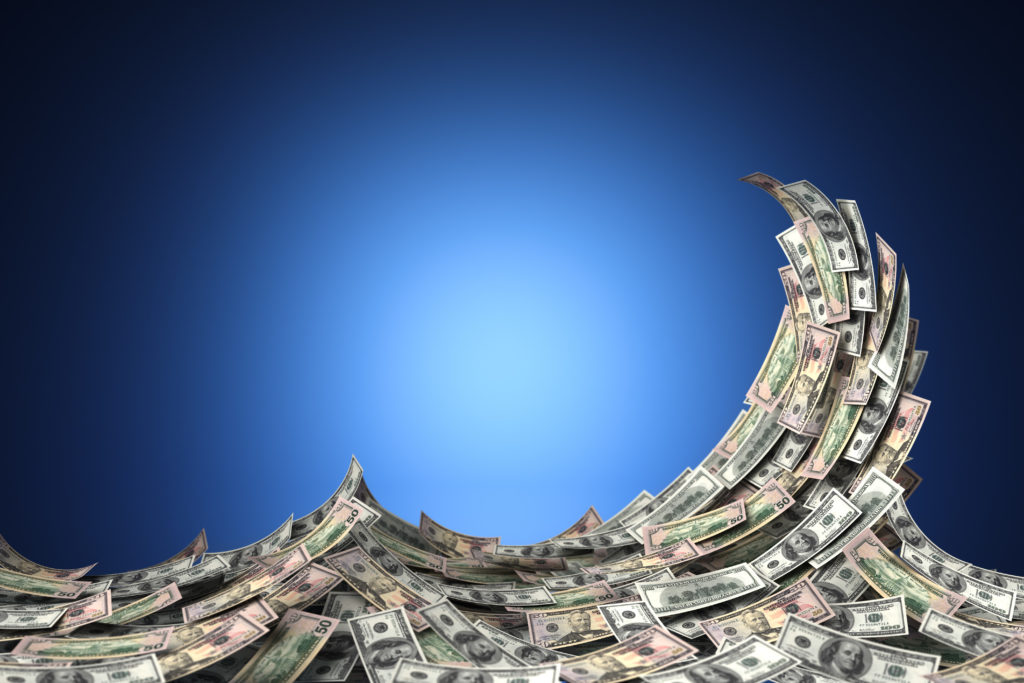 When the FEC released campaign finance data from the third quarter of 2018, Nate Silver of fivethirtyeight.com shifted his House predictions further in favor of the Democrats. Republicans were out-fundraised in the third quarter and that may cost them in key California elections and ballot measures.

The national Republican Party began to pull money from candidates in the middle of September in a bid to concentrate funds on tight races. Not surprisingly, this has hit California Republicans hard. Registered Independents have recently surpassed the number of registered Republicans in California. The party is far from competitive in California. Here we look at six Southern California congressional districts that lean more right than the national to show how the lackluster Republican campaign finance can change the outcome of the election.

In Southern California, Democrat challengers are outspending incumbent Republicans. In the 25th Congressional District, which covers the northern LA County, incumbent Republican Steve Knight, has raised $2.1 million while his challenger Democrat Katie Hill has raised $6.2 million. In the third quarter of 2018 she raised $3.8 million and Knight raised only $421,422. Nate Silver has predicted that there is a 64.3% chance that Hill will win, flipping the seat to blue. The 25th congressional district is not the only example of challengers having more money and having a good chance of beating the incumbent Republican. Mimi Walters, the Republican incumbent of the 45th district, has raised $4.5 million for her campaign. But her Democratic challenger, Katie Porter, has accumulated $5.8 million in her war chest. The model at fivethirtyeight gives Porter a 64.5% change of winning and changing the seat to Democrat.

California’s 49th Congressional District, which holds portions of Riverside Country, is an important target for Democrats. The seat has, since 2003, been held by Republican Darrell Issa. But Issa is retiring this year, making this an open, competitive race. The Democratic candidate Mike Levin has raised almost $5 million, whereas the Republican candidate Diane Harkey has only raised $1.3 million. While Levin was still receiving contributions from the Democratic Congressional Committee in mid-August, the Republican Congressional Committee last contributed to Harkey’s campaign in mid-July. The Congressional Leadership Fund, a large conservative PAC, has not donated to Harkey’s campaign despite pledging to spend $17 million on ads for Southern California house members.  Nate Silver has now issued a prediction that gives Levin a 97.6% chance of winning the seat, flipping a previously solid Republican House seat to the Democrats.

California’s 39th Congressional District, which encompasses parts of Los Angeles, Orange, and San Bernardino counties, shows what can happen when the Republican Party strongly backs a race. The seat was previously held by Republican Ed Royce who decided to retire this year. The Democrats had marked the county as a competitive one due to Clinton carrying the district in 2016. The competitive nature of the race has made it one of the most expensive house race in this election cycle.  Cisneros would appear to have a huge advantage as he has raised $11.1 million while Kim has only raised $2.5 million. But, the majority of Cisneros’s money is not coming from the Democratic Party or donors in general. Cisneros’s campaign is mostly self-financed as he has spent almost $9 million of his own money. Meanwhile, Kim is actually receiving lots of support from the Republican Party in the 3rd quarter. In October the House Majority PAC spent $2.7 million on an ad campaign for her and in September the Congressional Leadership Fund spend $567,000 on an ad campaign opposing Cisneros. Meaningful financial support from the Republican Party has kept this a tight race. Despite the Democratic enthusiasm, Nate Silver gives Democrat Cisneros a 59.1% chance of winning and Republican Kim a 41.9% chance of winning, suggesting that if there were more money for California Republicans, local Congressional races might be less favorable to Democrats.

There is one conservative local district that stands robustly against the blue wave; the 42nd Congressional District where Republican incumbent Ken Calvert has a predicted 97.4% chance of keeping his seat. Calvert has been a House member since 1993 and serves on the appropriations committee. According to the Cook Political Report, the district is +9 Republican. In the open primary, Calvert had 61.8% of the vote and Democratic challenger Julia Peacock received 25.6%. The district went to Trump by 12 points in the 2016 election even though California went to Clinton by 30 points. In this case of a strong Republican incumbent in a decidedly conservative district, the money advantage remains with the incumbent. Calvert has raised $1.4 million for his campaign while Peacock has raised only $137,462. Here the narrative runs the other way as it is likely that Democratic money stayed away for fear the seat was a lost cause.

Duncan Hunter of the 50th district is one California Republican who may keep his seat despite the pressure from the flood of Democratic money. Despite raising $1 million for his campaign, Hunter has been severely outraised as his challenger, Ammar Campa-Najjar, has raised $3.1 million. While Cook Political Report rates the district as leaning the Republican by 11 points, the result of this massive spending imbalance has been to make for a previously close race. As of October 25th Nate Silver had given Hunter a 53.3% chance of retaining his seat. By October 29th, his chances of winning went up to 84.4%. When the race had been tighter, why was Democratic money flowing to the effort to defeat Hunter in the R+11 50th rather than Calvert in the R+9 42nd? Perhaps because Hunter, who was indicted for campaign finance violations in 2017, was seen as vulnerable for other reasons, thereby emboldening the opposition to select a stronger challenger and commit more money. 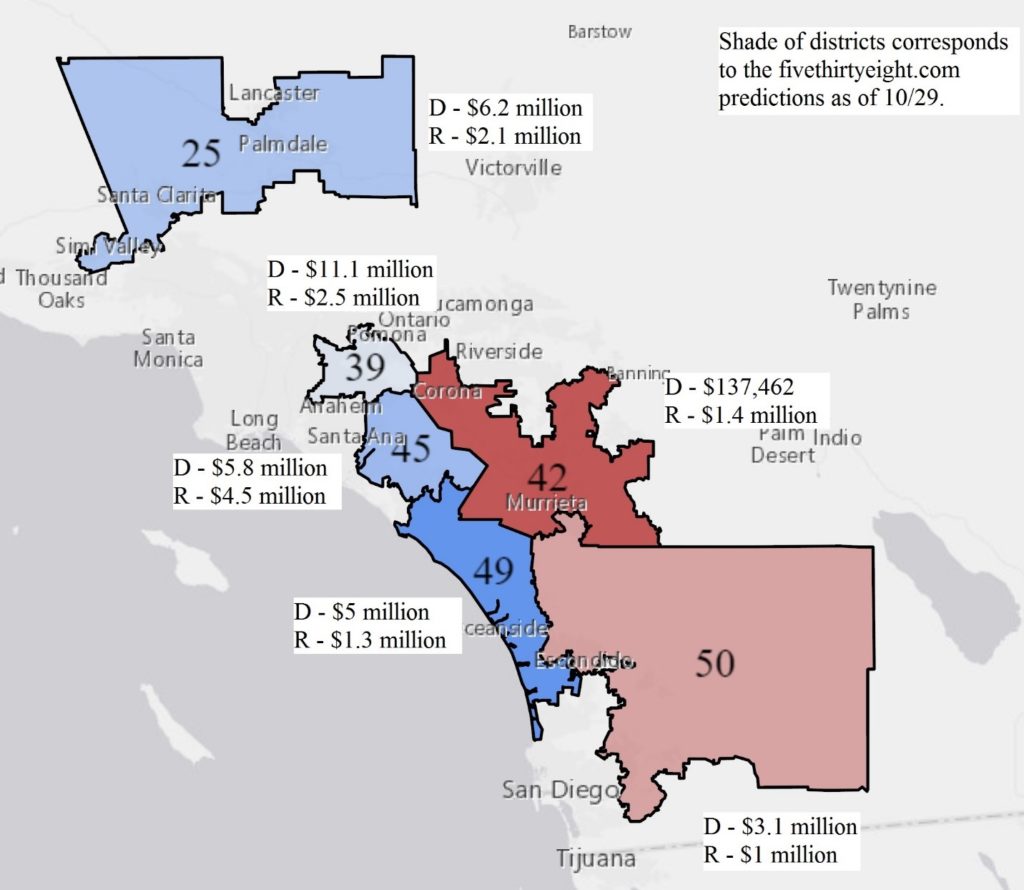 The shortage of money on the Republican side has also affected related ballot measures. The placement of Prop 6 on the ballot was part of the California Republican Party’s plan to get Republicans to turn out to vote. Prop 6 aimed to repeal the 12 cent tax increase on gas that was enacted at the beginning of this year. This has long been a tactic of the Republican Party: put a proposition to reduce taxes and more Republicans will vote on that, and consequently also vote for Republican representatives. In commuter districts in California, like the Inland Empire, this is a large incentive to go to the polls. Many Republican candidates had been pumping funding into the proposition from their own campaigns. However, as the races have become bleaker, Republicans have stopped their monetary support of the proposition. Calvert last donated to the measure in March of 2018. Walters did not contribute in the 3rd quarter, despite donating in the previous four quarters. Her last contribution in April was also only a loan. John Cox, the Republican Candidate for Governor, and Kevin McCarthy, Republican incumbent of the 23rd district, have not donated to the proposition since the campaign to put it on the ballot. The California Republican Party has spent $466,638 on the measure but the flow has been declining. In February the party donated $200,000, in March 101,638, in April $100,000, and their most recent donation was in June for $52,500. In the third quarter the party did not donate any money in support of the proposition. The opposition to the Proposition is drastically out-fundraising the support. The opposition has raised $18.5 million and the support has raised $2.1 million. As red money dries up and blue money flows freely, Southern California races for the US House are being run under conditions heavily favorable to Democrats.