One of California’s closest ever votes was one of its most important. In 1911, nearly 250,000 residents showed up to the ballot boxes to vote on Proposition 4, an amendment to the Constitution of California that would recognize women’s right to vote. The amendment passed by a margin of just 3,587 votes — approximately one vote per precinct — making California the sixth state to grant women suffrage.

To the California residents of today, the state’s passage of a progressive proposition probably comes as no surprise. Yet, the voting geography of the Proposition 4 vote in 1911 hardly resembles the voting geography of today. Some of the staunchest opposition to Proposition 4 came from the major Bay Area cities – San Francisco and Oakland in particular. In fact, San Francisco County registered the lowest level of support for the proposition out of all California counties, with only 38.1% of voters backing suffrage. San Mateo, Marin, and Alameda counties, which are some of California’s most progressive counties today, also voted overwhelmingly against the proposition.

Conversely, it was voters in California’s rural counties that supported suffrage most ardently. Modoc County (70.5% support) and Trinity County (69.6% support) had the highest levels of support for the proposition, though they only combined for a total of 766 votes in support. 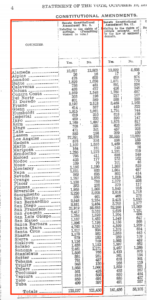 Image of the original vote count, from the California Sec of State

Though perhaps counterintuitive to California voters of today, who see an increasing divide between conservative, rural voters and progressive, urban voters, the high level of rural support for women’s suffrage in the 1911 vote was not surprising at the time. In urban areas, the suffrage movement came up against powerful and organized opposition whereas there was little organized opposition to the suffrage movement outside of California’s major cities. More importantly, women’s suffrage had broad support from working class women, especially farmers, in both California and beyond.

The voting patterns for Proposition 4 in California broadly reflect relative support for suffrage across the US during the Progressive Era. Fifteen US states passed state-level legislation granting women the right to vote before the 19th Amendment was passed in 1920. Of the 15 states who did so, 13 are located west of the Mississippi. The western states and territories that adopted women’s suffrage legislation prior to 1920 were significantly more rural than those to the east. Indeed, the combined populations of the first five US states to grant women the right to vote – Wyoming, Colorado, Utah, Idaho, and Washington – was significantly less than the population of New York City in 1900. 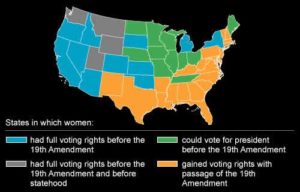 As historians have noted, western states and territories provided fertile ground for women’s suffrage movements. The younger state governments of the West were more open to political experimentation than those back east, and suffragists had an easier time forming coalitions with nascent social and political movements in the region. This was especially true when it came to trade unions. On the east coast, manufacturing industries were male-dominated and associated trade unions lacked female input. Meanwhile, in the less industrialized West, the egalitarian spirit of family farming was more conducive to women visibly holding positions of power and being treated as equals by their male counterparts.

As the US celebrates the 100-year anniversary of the 19th Amendment, it is often forgotten that the West led the way on women’s suffrage. California, the most populous and politically influential western state of the era, played an especially important role as a vanguard of progressive change. While the geographic sources of California’s progressivism have shifted since 1911, the state’s status as a leader of Progressivism is deeply rooted and enduring.