Skip to content
HomeElectionsThe Animal Spirits of Donkeys and Elephants

You may have heard that household spending decisions constitute 70% of total economic activity in the United States. Consequently, understanding how households currently view their present and future finances is critical to projecting the overall trajectory of the U.S. economy. Consumer sentiment indices are surveys of several hundred households that are then condensed into single-number summaries of households’ perceptions of the economy at large and how it is affecting and will affect their own financial well-being in the present and near future. Sentiment indices are typically pegged at 100 in a base quarter and then allowed to evolve to show how consumers are more or less optimistic than they were in the base quarter.

Most consumer sentiment indices are collected for the national economy as a whole—the most famous is run by the University of Michigan and has been published since 1946. But in a country as large and diverse as the U.S., different metropolitan areas can be experiencing decidedly different trajectories. Thus in order to provide locally relevant information, the Lowe Institute of Political Economy has collected and published quarterly sentiment indices for the Los Angeles metro area since June 2015. We have separate indices for Los Angeles county, Orange county, and the Inland Empire (San Bernardino and Riverside counties). Results and analysis are published quarterly and available for public viewing. 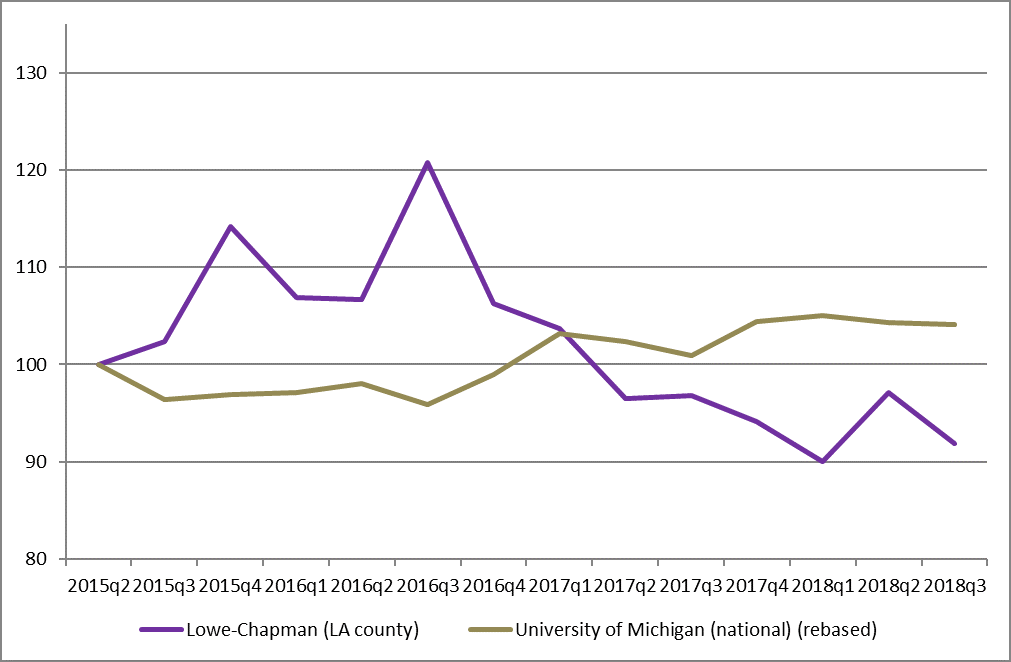 As the above graph makes clear, over the past two years, there has been a widening gap between consumer sentiment in Los Angeles county and consumer sentiment for the country as a whole. We suspect that consumers filter their understanding of the economy through their partisan political lens. To investigate this issue, we added new questions to the index this quarter. Namely, we asked respondents to report how warmly or coolly they felt towards each of the two major political parties. We were careful to ask them after the traditional consumer sentiment questions so as not to prime the respondents. We then used these data to classify respondents into Republicans, Democrats, and those without a strong partisan preference.

We found that political affiliation is extremely strongly correlated with consumer sentiment in Los Angeles county, even after controlling for other factors that reliably influence sentiment. Among those without a clear partisan preference, the index is 99.7, indicating levels similar to those of the Index’s base quarter – the second quarter of 2015. Since 2015 the national consumer sentiment, as measured by the University of Michigan, has risen a modest 4.1%. This suggests that, among respondents without strong partisan preferences, consumer sentiment in Los Angeles is not markedly different from nationwide average consumer sentiment. However, among those preferring the Democratic Party, the Index is a frigid 84.0. Meanwhile, among those with a preference for the Republican Party, the Index is a roaring 132.4. 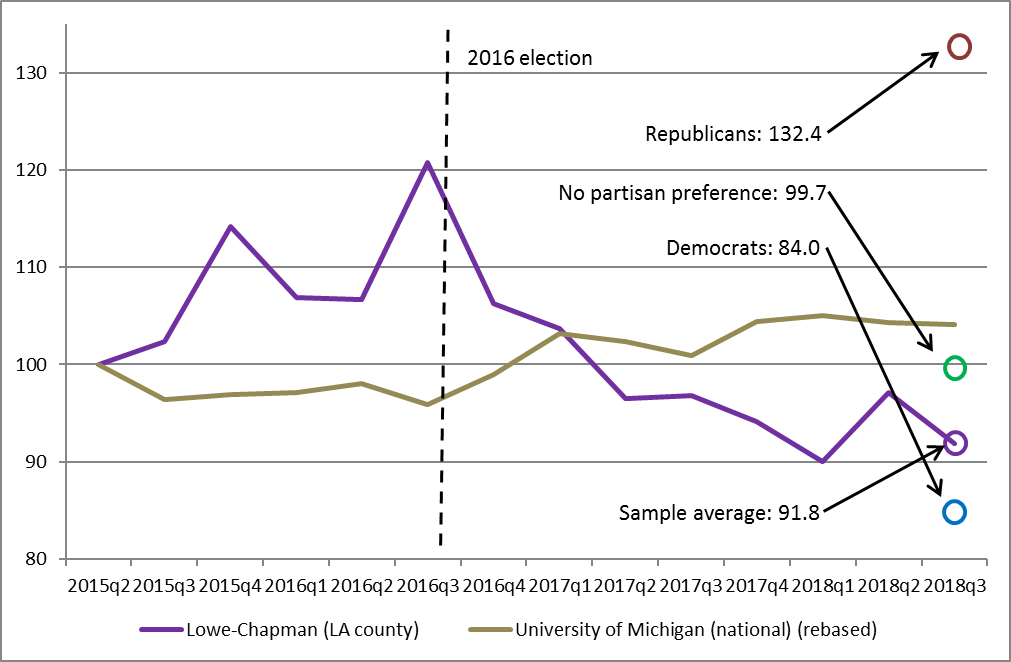 The vast difference in sentiment across partisan groups suggests a simple reconciliation between the national index, which is up strongly over the past two years, and the Los Angeles county index which has declined persistently since the 2016 election. While the nation as a whole is generally balanced between Republicans and Democrats, Los Angeles county skews heavily Democratic. (You may have noticed Los Angeles was euphoric heading into the 2016 election and then dove after the unexpected Trump victory. We’ll see what happens following next week’s election.)

Why such strong correlation between political preference and consumer sentiment? This can occur in two ways. Political preference is frequently an expression of one’s policy preferences. E.g. consumers who believe tax cuts are a good way to stimulate the economy thus believe the Trump tax cuts will be beneficial and also generally identify more strongly with the Republican Party. Second, it might also be the case that when a person sees the party with which they identify in the political ascendancy, they feel more optimistic and interpret the very same news more optimistically than they otherwise would.

Does the correlation between partisan preference and consumer sentiment matter for local economic prospects? In fact, yes. It has been shown that consumer sentiment has statistical power to predict spending even after controlling for other factors like changes in interest rates, stock market indices, and household income. To some degree, consumer sentiment measures the animal spirits that Keynes deemed so important. Apparently, the relevant animals were donkeys and elephants. 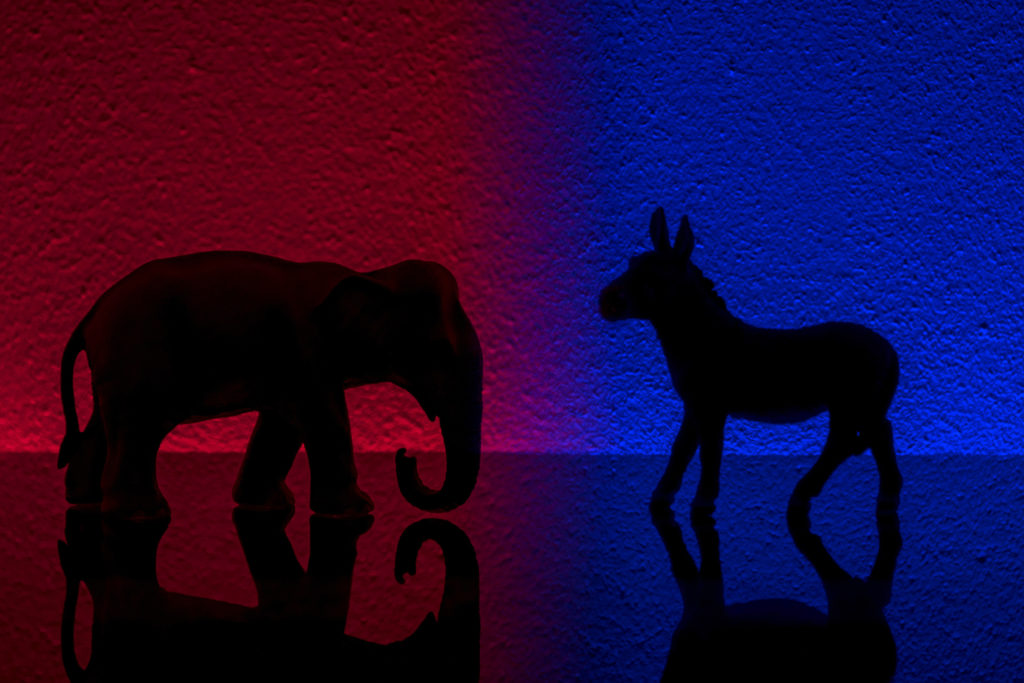