Each quarter the Lowe Institute partners with Chapman University to produce consumer sentiment indices for three nearby metropolitan areas: Los Angeles, Orange County, and the Inland Empire. The fourth quarter results—based on surveys conducted in mid-December—are in. You may recall it was a rather eventful quarter headlined by a precipitous stock market decline and a Federal election, but also featuring continued strength in the labor market, an expected quarter-point interest-rate hike from the Fed, and a temporary truce in the trade war with China.

The combined effect of this roil was a moderate 3 percentage point decline in consumer confidence in the Inland Empire. The effects of specific events can often be seen in the data. For instance, one of our questions asks, “Compared to today, if you lost your job within the next year do you think you would have better or worse chance of finding a new job?” As you can see from the following figure, over the past couple years, responses to this question are considerably more positive than the index as a whole, indicating that the labor market is and remains a particular source of confidence. We trace economic influences in our regular coverage. But today, I want to address a different angle. 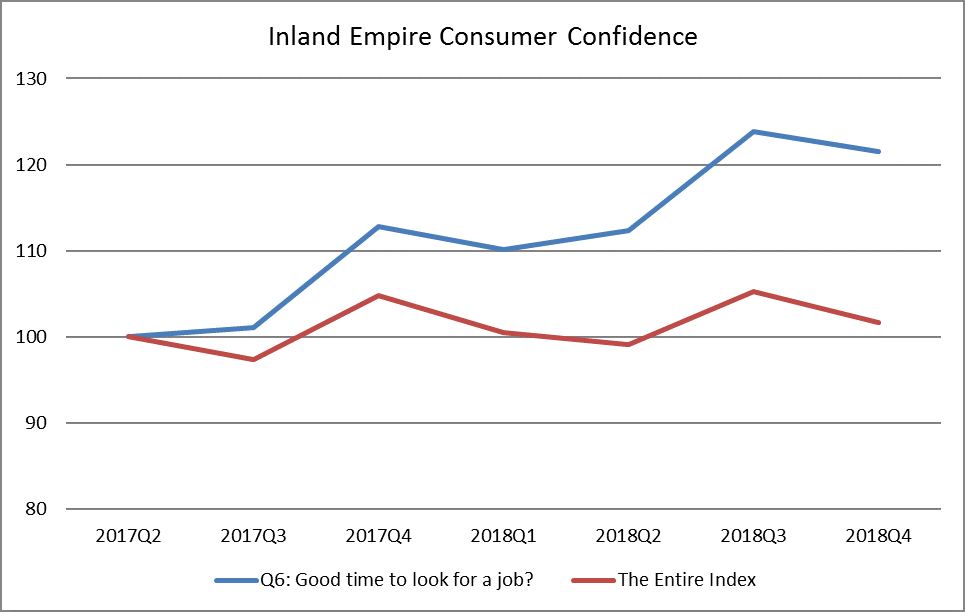 Consumers’ views of the economy are affected by a variety of non-economic factors. Certainly one’s own financial situation and the experiences of close family and friends matter. But these events are filtered through a variety of perspectives. As a result, two consumers with similar economic situations often differ widely in their degree of confidence in the economy. More importantly, this isn’t just a source of random noise; there are a few predictable demographic characteristics that correlate with consumer confidence. In a previous post we showed the vast difference between how Republicans and Democrats process the same economic environment. Not unreasonably, those whose preferred party is in power believe the future will be rosier than those who disagree with the party in charge.

The other consistent demographic effect is somewhat more personal and a little melancholy. Marital status has a large and consistent effect on consumer confidence. As the next figure shows, the divorced, separated, and widowed are less confident than those who are married, cohabiting, or have yet to be married. 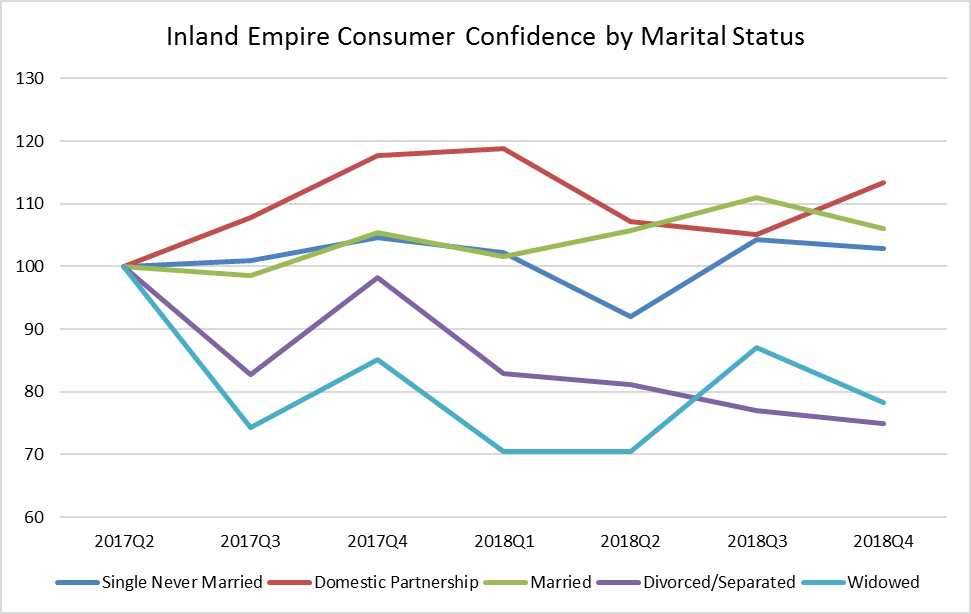 There could be an economic basis for this persistent difference. Financial commitments made in the expectation of a shared life could be difficult to meet when on one’s own. Rent or mortgage payments are the clearest example of such a commitment. Those who are single and never married—whose confidence remains in the high group—are also trying to procure housing without the economies of scale afforded a couple but they may be more willing to accept house-mates and are less likely to have children to provide for. Nor would they have to go through the process of downsizing and mentally comparing a current situation to a previously grander one. So there are financial reasons why the economic outlook of the divorced and widowed may be more fraught than that of the otherwise comparable single and partnered. But it is also possible that comparable economic circumstances are simply processed less optimistically when one has lost a life partner.